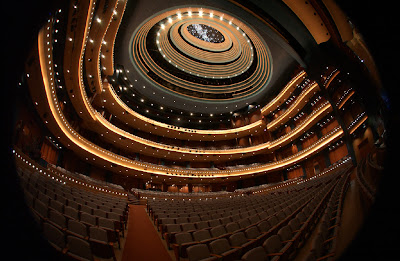 "Space - The New Frontier"
© David A. Ziser
Interior space that is - I made this image of the magnificently beautiful Schuster Performing Arts Center in Dayton, Ohio. It is simply the most stunning interior architecture I have ever seen. The curves, lighting, the touch of the stars in the ceiling representing the sky on the eve before the Wright Brothers (who had their bicycle shop in Dayton, Ohio) took to wing in their first flight, December 16, 1903 - all of which still visually amazes me. My image was made on assignment for the sound company who installed the sound system. Since that shoot, LaDawn and I still make the occasional trip to Dayton just to visit the Schuster Theater. Camera specs; Nikon D1X fitted with Sigma 8mm fisheye lens, F5.6 @ 1 second (on a tripod), ISO 400.
Enjoy! -David
Posted by David Ziser at 2:21 PM