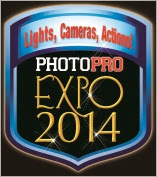 I know, I’m back already - only a day later ;~)  But it’s because I am so excited to tell you about the BIGGEST thing happening here in the Midwest for Photographers, Artists, Graphic Designers, and anyone else who loves lighting, photography, composition, Photoshop, Lightroom, & running a better business.  It’s PhotoPro Expo 2014 and it’s happening NEXT WEEK!

This show has been a big part of my life these last four years – I’ve always wanted PPE to be the best valued educational experience for everyone and anyone really excited about photography.  Now, thanks to so many photographers that feel the say way, it’s grown into the the biggest photographic convention and trade show in the Midwest! When you REGISTER RIGHT HERE be sure to use PROMO CODE PPEDPT14 to save $120 from the regular price of $279. 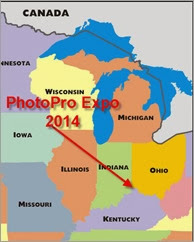 Last week we passed our registration numbers from last year's attendance numbers and last year was a BIG show too.  WOW! And we still have one week to go.   In fact, our main hotel is already sold out! No problems though, the Embassy Suites right next store still has plenty of rooms.

This year we’re expecting over 1200 attendees  to participate in the weekend activities.  That’s a HUGE number of people for a convention in this part of the country.  So, don’t miss it – it’s a great opportunity to have a wonderful time and an awesome way to make new friends and connections.  And heck, you may just learn a thing or two ;~) 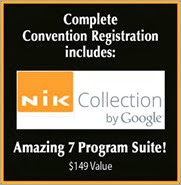 2. PLUS $600 of additional valuable items generously donated by our vendors and sponsors. You can find the entire listing right here.

3. On top of that, this year's tradeshow is even larger than last year's  with over 115 booth spaces laid out on the trade show floor.

4. PLUS, you get 14 hours of FREE programming by the "best presenters in the business" right on the tradeshow floor over Saturday and Sunday.  You can get a trade show pass from most of our sponsors or RIGHT HERE. 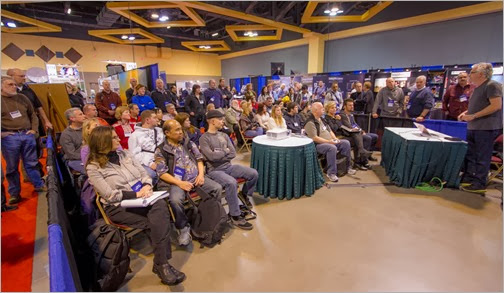 5. Part of that Expo excitement has been because of our guest speaker line up and our brand new Hollywood Model Shoot Out and prizes for the most creative image taken at the shootout. 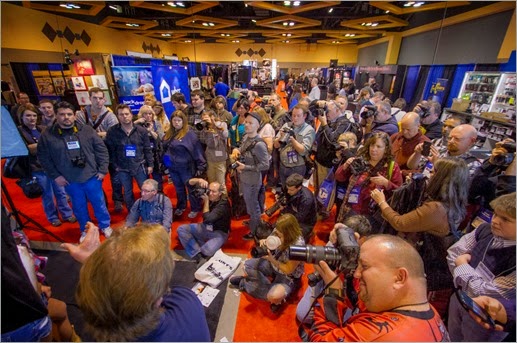 6. This year we also have Portfolio Reviews and, new for this year personal Business Reviews conducted by a select group of successful photographers. Their vast experience and knowledge will  point you in the direction towards your own business success! 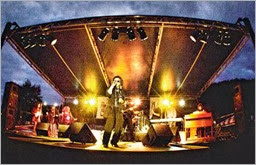 7. Two BONUS programs FREE Thursday night – one on Green Screen Sports Photography and the second on How to Win In Print Competition.

8. Plus we’re having a knock-your-socks-off  Oscar Party with the award winning Teeny Tucker and her 7 piece band Saturday night! 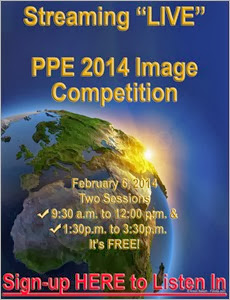 9. Annual Print Competition where you can win nearly $2000 in prizes just for entering regardless of your print score!  Hey, beautiful trophies will be awarded for the highest scoring prints too.

10. Two "LIVE" broadcasts of our ever popular Print Competition [link] on Thursday.  You can get all the details and sign up for the webcast right here.

Sure beats sitting home in front of your computer monitor watching YouTube videos ;~)

Hey gang, I really hope to see you there.  A lot of people have gone to a lot of work to make this year’s PhotoPro Expo 2014 the best ever!

Posted by David Ziser at 4:24 PM No comments:

From the emails and phone calls we've been receiving at the studio over the last few weeks, folks having been wondering whether or not I've fallen off the face of the earth or even worse ;~) Well, let the rumor mill subside - I am indeed still alive and well – and maybe a few travel pounds less light than when we left for Eastern Europe September 8, 2013 ;~) 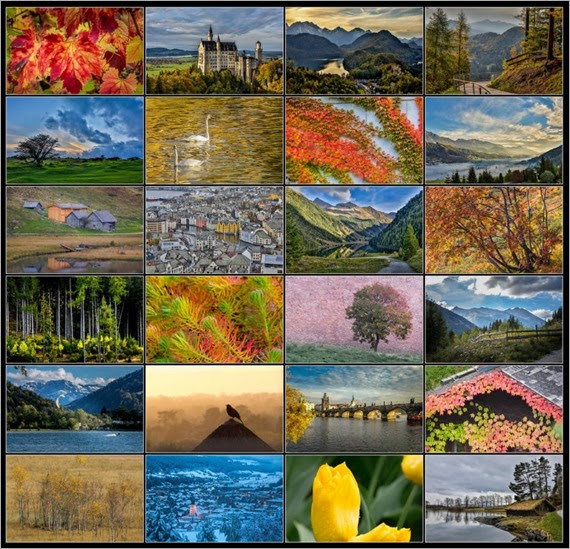 I've got lots to fill you in on but let me give you a quick update today and I'll plan to stop by again in the upcoming days to fill in some details and tell you about some cool things happening around  DigitalProTalk.

My last post was several weeks ago [link].  We returned to the States after making the Atlantic crossing from England, visited a few friends in Florida, and then headed home after our two and half months traveling through Europe landing back home November 18, 2013.  During those thousands of miles of travel I made several thousands of photographs – about 29,000 but more on that later.

Home For The Holidays – Not Quite!

We were only home for ten days but were thrown into the Holiday rush getting last minute orders out for clients and just plain getting ready for the quickly approaching holidays. Then the day after Thanksgiving, we headed to Cabo San Lucas, Mexico for a three week stay enjoying the warm weather, beautiful sunrises (like the one below) and gorgeous sunsets and a few more thousand photos. Like I mentioned above, more on the photographs later. 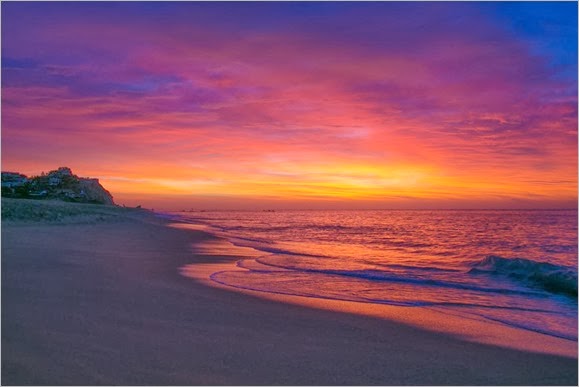 We landed back in town 3 days before Christmas and then were immediately caught up in the rush of the holidays - all this while working like crazy on our upcoming convention, PhotoPro Expo 2014.  Needless to say, it's been crazy, busy around here. But, I am still alive and well ;~)

Happy New Year! And Off To Imaging USA Convention

We were actually home for 18 days and then it was off to Imaging USA Convention being held in Phoenix , AZ this year.  My buddy, Ralph Romaguera has been  President of the Professional Photographers of America this past year and we wanted to give him our full support and any help where needed.

We just returned last week from the Imaging USA Convention  where we had a great time visiting friends and making many new ones; exploring the trade show from front-to-back and back-to-front; and having the wonderful opportunity to hang out with the legendary singer and photographer Kenny Rogers and his mentor, acclaimed photographer and Ansel Adams assistant, John Sexton. 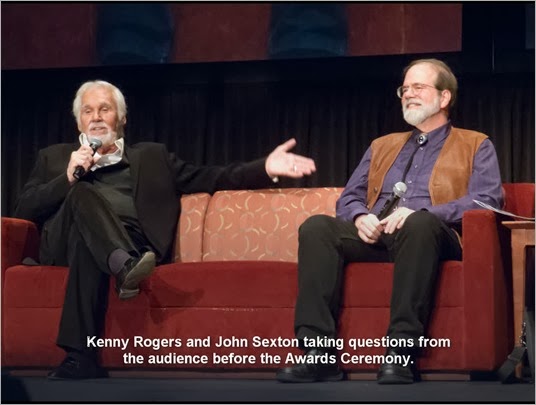 You heard me right – Kenny Rogers was awarded the Honorary Master Of Photography Degree from Professional Photographers of America.  If you didn’t know it before – Kenny is quite an acclaimed photographer in his own right. He has published three books on the subject and is producing a fourth as we speak. I own his first, “Your Friends and Mine.” [link]  It is really well done – very similar in stile of Karsh portraits.

Anyway, since my good friend Ralph is president of PPA this year, he included us in all the special activities, including hanging with Kenny and John….pretty cool.  I have to tell you, both men were true down to earth gentlemen. Their work was exceptional. The experience was a real pleasure. 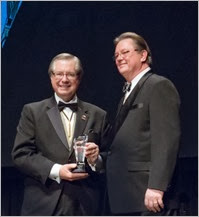 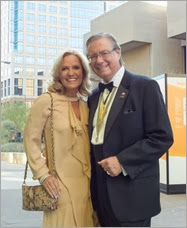 I have to tell you too – in addition to the good times we were having, I was humbled by the fact that I was to receive a very high honor myself at the Awards Ceremony.  Turns out I received the Helen B. Yancy Award for distinguished service to the industry. Turns out I was only the seventh person ever to receive this award.  It was very exciting as well as quite humbling. Per usual… LaDawn looked fabulous on our way to the Awards Banquet ;~)

But now the partying and good times have come to a screeching halt as we are fully ramped-up in getting PhotoPro Expo 2014 ready for launch February 6th. 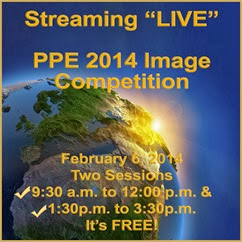 On that note gang, I’m out of here.  Hope you enjoyed the latest update and a few images from our travels.  Tomorrow I want to give you an update on the PhotoPro Expo 2014 Convention and a very cool Print Competition Webcast coming up.  You can get a lot of info about the webcast right here. Just scroll down a bit to see the registration links. This is areal educational experience and one not to be missed.

But for now, I’ve got to scoot and get back to work. LaDawn and I have been working non-stop to make this the biggest show ever and it’s shaping up to be just that.

I promise, you’ll be hearing from me several times these next few weeks so please stay tuned.

All the best,  David