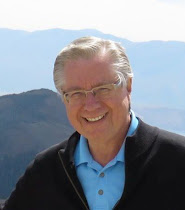 I'm not photographing many weddings these days, but we still have a  lot of things going on in our lives that keep us plenty busy. LaDawn and I have been traveling the world quite a bit pre-Covid but sadly, Covid kept us at home in 2020 and 2021. Finally, travels are ramping back up this year.
That said, I've got some cool adventures to share with you today.  We recently returned from another month-long trip to South Africa and Botswana. These were two safaris that were canceled in 2020 because of the pandemic but we finally were able to reschedule them this year. 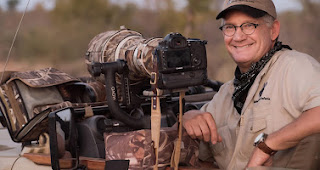 Both safaris were extremely exhilarating and I can not recommend them highly enough. My friend, Kevin Dooley, and I led the photo safaris, and LaDawn and I helped hosted these events too. Both safaris turned out to be spectacular. In Botswana, we saw more cheetahs than we’ve ever seen before on any of our other three previous safaris, and I captured some great photographs.  South Africa was equally exciting as we saw some very rare instances of a lion taking down an impala. There’s more to the story so please read on.
Botswana - the Cheetah Capital of the World. 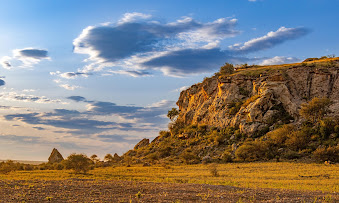 First, the Botswana trip. The highlights of our Botswana safari were the amazing group of photographers joining us the awesome sightings we experienced and the fact that the geography is so much different from South Africa. There are more hills, mountains, and rock outcroppings than you ever see on the plains of South Africa. It almost looks a little like Arizona. Great weather, awesome sightings...we got some great photos.
Just look at a few of the photos below – the first photos are  LaDawn‘s photographs.
By the way, she does a great job with her  Sony RX 10 Mark 4. 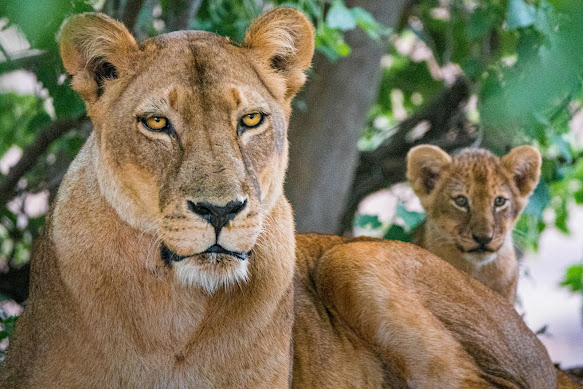 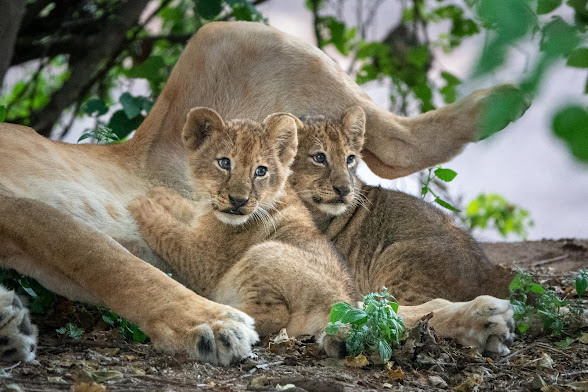 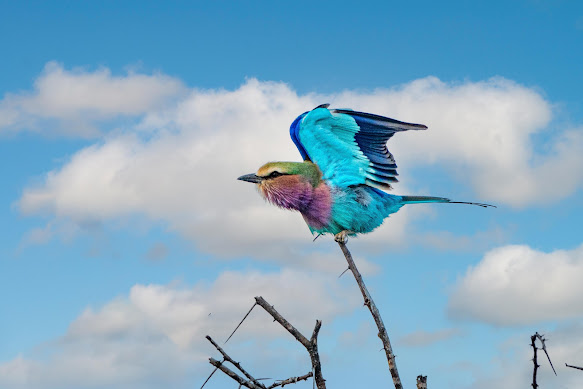 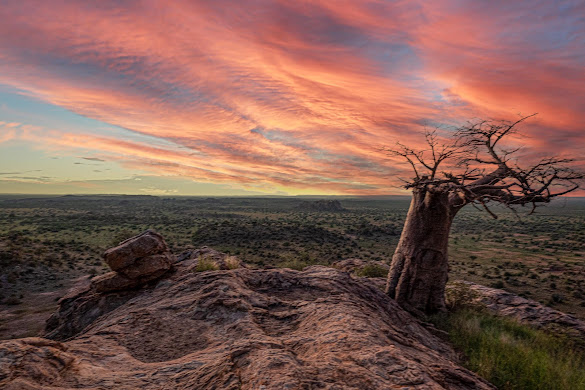 This year I was shooting a new Canon EOS R5 which is a very cool camera to shoot with.  Let’s take a look at the first photograph below. It’s a photograph of the cheetah brothers, yes they are indeed brothers. Kind of like teenagers as far as age goes. This is a rare thing to see because the mother raised five cheetahs and they all lived to adulthood. Because of the wildlife dynamics in Botswana, this is pretty much a rarity. 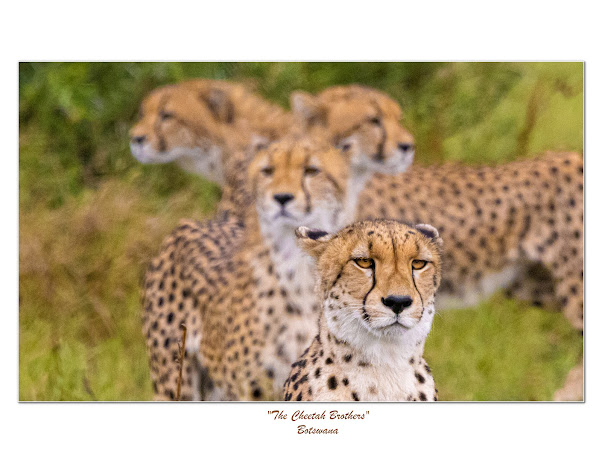 Very quickly, I upgraded my Canon 7D Mark II to the new Canon EOS R5 just about a year and a half ago. This is the first time I really had a chance to put it through its paces. And the results emphasize just how good this camera is. I prefer the much faster shutter speed (20fps), the lower light sensitivity, and the quickness of the focus. Here are a few more of my images with the EOS R5. 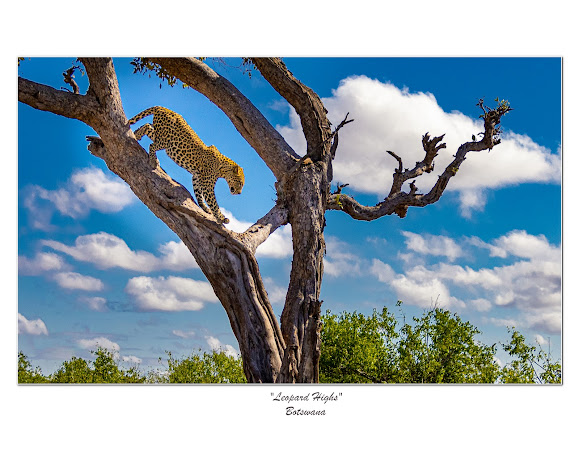 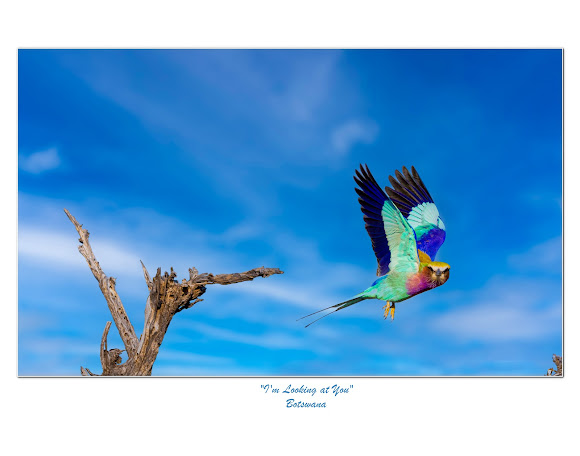 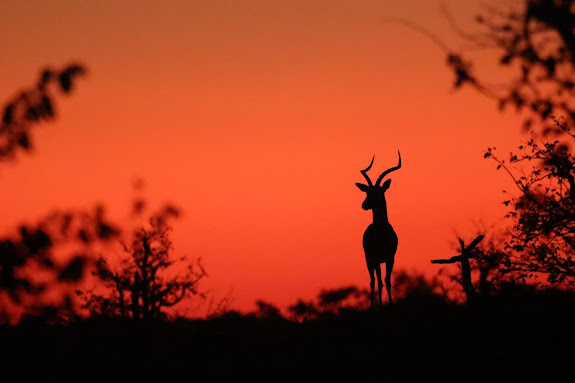 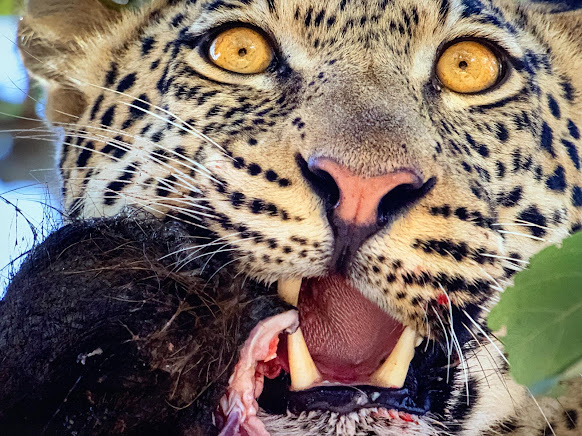 I know this is a little "gross" but we actually witnessed the leopard catching this warthog and then proceeded to watch him carry it up into the tree the night before - way cool!  The first photo above is of the leopard leaving the tree a few days after he finished his lunch. 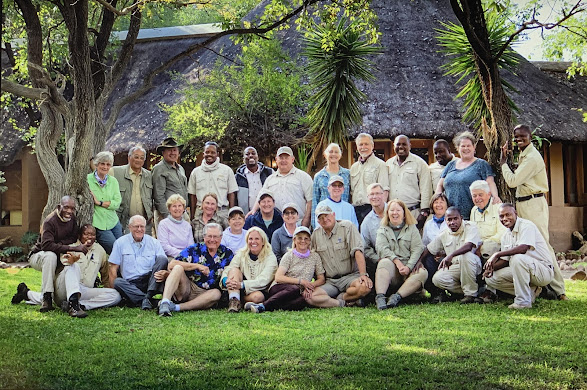 And a photo of our entire Safari group including guides - we all had a great week!
On To South Africa...  Where the Action Was
Our trip to South Africa represented our fourth Safari to that part of the African continent. We have been three times to Thakadu and we love the wonderful adventure in the wild, the unbelievable wildlife we see,  and we love all the folks at the lodge – some of the friendliest on the planet earth!.
Once again our safari to South Africa did not disappoint. People ask if one safari location is better than the other? My answer is always "that each and every safari is different and special in its own way". That could be in the animals that you see, the activities that the animals are engaged in, or just the quantity of animals you may encounter.  Here is one of my favorite images which LaDawn took on her Sony RX10 Mk 4.  She caught the giraffes just right for this fun photo. 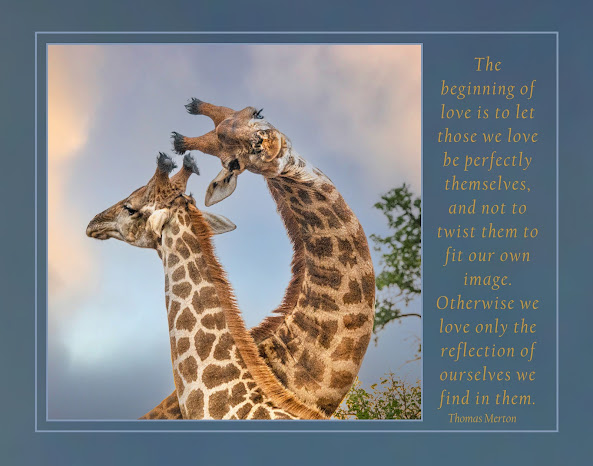 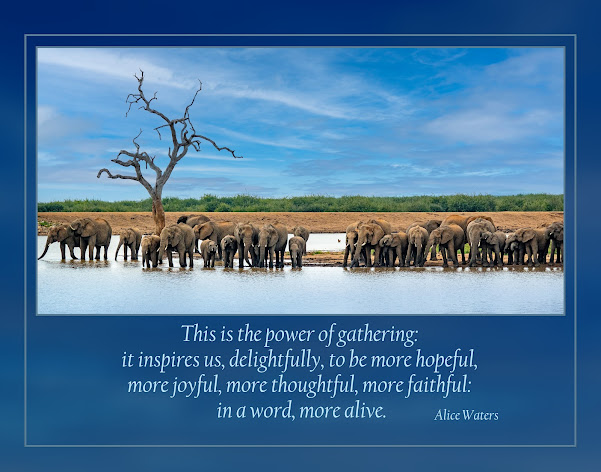 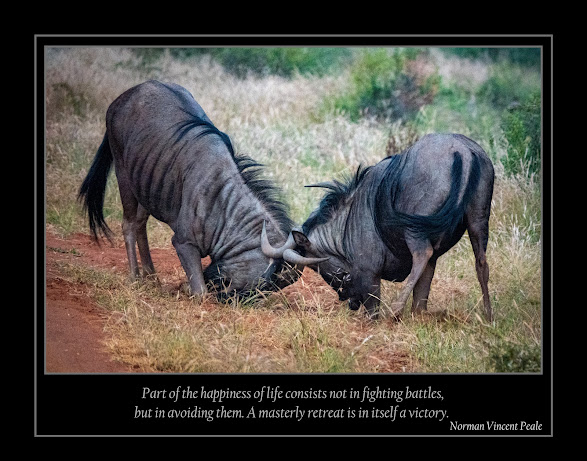 Pretty cool images, don't you think?
The highlight of our South Africa trip this year was the fact that we saw two male lions and four female lions hunting for prey. The prey turned out to be the poor lowly impala - the savanna smorgasbord for big cats everywhere in Africa. We found the lions on the prowl and followed them for several minutes monitoring their hunting behavior. It was only a few minutes later when all "heck" broke loose.
We were the first ones on the scene to see that the female lion had taken down the impala her jaws were around the impala‘s neck and its demise was a foregone conclusion. 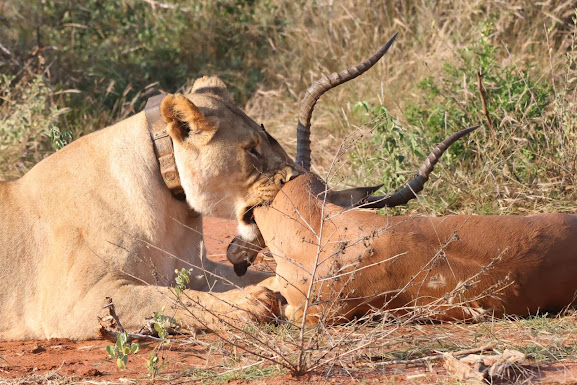 Within a minute or two a male lion shows up and chases the female lion away saying he was going to take over {in lion talk}. The impala, which we thought was dead or near dying quickly springs to it's feet and took off. This is when all "heck" broke loose a second time. 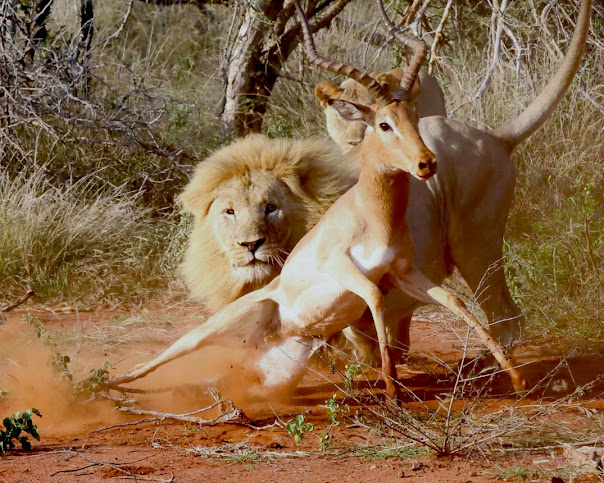 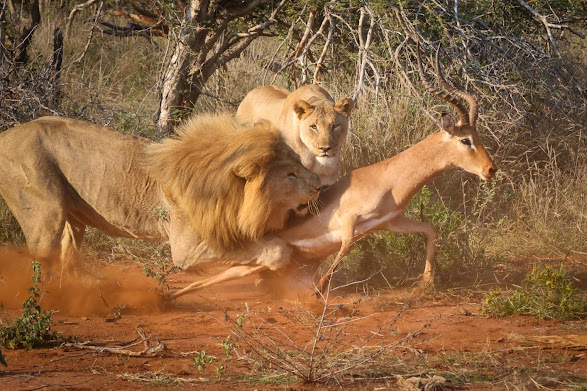 I captured a great series of photographs showing the chase and capture of the impala along with the battle between the male and the female lion. Above are just a few of the images.
The action was going on for so long, thankfully something in my "brain" said to start the video rolling on my camera - which I did.
This YouTube video below shows the height of the action and really captures the excitement of the moment. Our tour guide shared that it was a very rare sighting and only about 1% of visitors on safaris ever see anything like what we witnessed.
When we got back to camp at the end of the day we all felt mixed feelings about this special event that we had witnessed. Oh, the rest of the story... the impala eventually got away! Yep, it’s true the impala got away, all the other lions were very ticked off with the male lion who let their "lunch" slip through his claws. The whole thing was really exciting to see.
We had a terrific group of folks on this safari which made it totally enjoyable for everyone that was part of our Safari adventure. 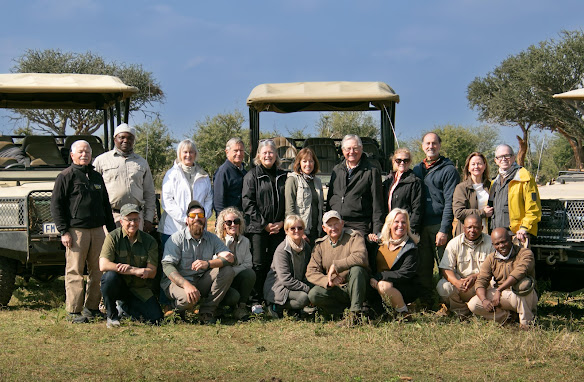 On to Capetown and Wine Tasting
After our trip to South Africa, we headed to Cape Town and spent a week there sampling the wonderful South African wines. That week was an easy, relaxing week after our too exciting and fairly strenuous safaris. The image below is of LaDawn and I with the winemaker at Anura Wineries - one of our favorite places. 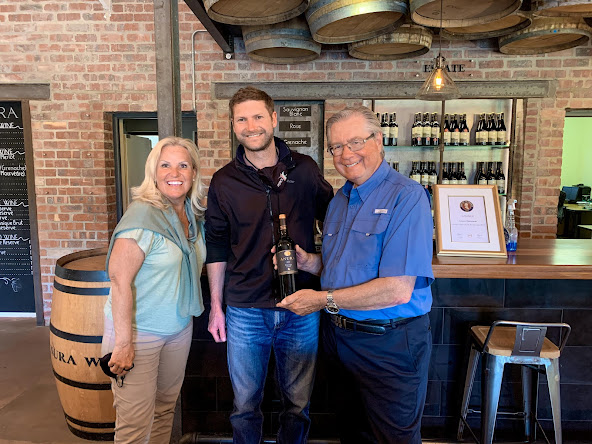 Is Antarctica in Your Future? Or Tigers and Taj Mahal, They Can Be! 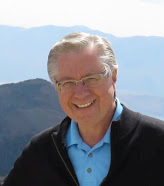 Hey everybody I wanted to invite you to three very exciting life-changing adventures coming up in 2023 and 2024.  Please read about them below. As you know I’ve been leading these photo safaris with my friend Kevin Dooley, owner of Idube Photo Safaris [link] since 2018. It has been a great segue from wedding photography and even a better segue into a brand new teaching experience! We call it "Life Changing" adventures. 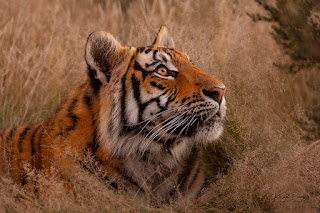 Our first safari is scheduled for May 1 - 15, 2023 of next year. We are going to venture off to India for two reasons.
First to photograph the Bengal tigers. Kevin tells me that the 2022 trip to India was an unbelievable adventure because of so many Bengal tiger sightings.  He has some fabulous images from his trip. 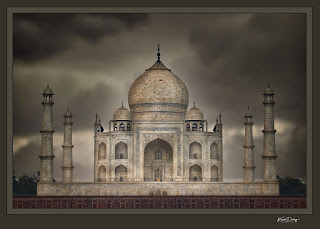 Another great reason you've got to go to India is to do a couple of tourist things. We have a few of those scheduled the most important is a visit to the majestic Taj Mahal.
This has been one of my bucket list places to visit for all of my life and I am truly looking forward to getting there next year. Here is the [link] for our adventures in India and Taj Mahal trip right here.
_____________________________
Jaguars and Wildlife of the Pantanal - August 5-15, 2023 [link] 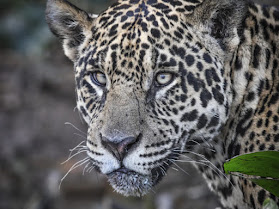 Our next adventure is scheduled for August 5-15, 2023. This trip will be to the Pantanal in Brazil.  In 2000, the Pantanal wetland was designated a World Natural Heritage and World Biosphere Reserve by UNESCO.  It’s almost a two-week trip and we will actually be staying in one of two floating hotels if you can believe that! 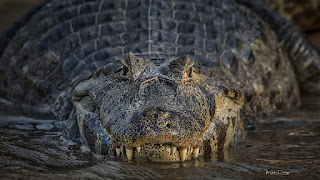 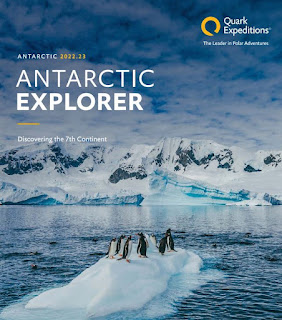 That’s right, we’re heading to Antarctica in January 2024 [link]. This is certainly been one of the most momentous buckets on my bucket list. We’ve been to six continents already and I really want to get that last one crossed off. Many cruise companies have what I call "Sail-bys" to Antarctica but, it doesn’t really count unless you can put your foot on the ground of the continent. This is your opportunity to do just that!
And that's what we’ve arranged for January 12-22, 2024. Kevin has been negotiating with the cruise ship company to really obtain the best price possible for this Antarctica trip. I think he’s got a reasonable price negotiated and far less than other cruise companies offer.
Just for reference, LaDawn and I looked at National Geographic‘s cruises to Antarctica and we were shocked to hear that their quote was $75,000 for both of us - YIKES!!! We even looked into the Viking cruises and that was going to be $40,000 for both of us. So I think at this cruise price of about $12,500 at least makes it much more affordable than the other two options, that's for sure. 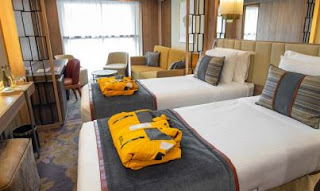 It’s a small ship but the accommodations still look fabulous. We had some friends do an Antarctica cruise a few years ago and they raved about it. And, everybody I’ve ever talked with that has been saying they would not hesitate to go back because of the thrilling adventure it was. So, check out the link below to probably one of the best adventures of a lifetime, our trip to Antarctica in January 2024.
______________________________________________________________
Hey Gang, first of all, thanks for taking the time to review the information on these three adventures of a lifetime. These are three new places LaDawn and I have not been to so we are really looking forward to sharing with you our travels next year and beyond. I suggest you contact Kevin and Tricia directly at their contact information below.
To register for any of these adventures please
Call Tricia or Kevin at 505-345-6302 or 505-401-2988
or email them at idubephotosafris@yahoo.com
If you’d like to contact me about any of Kevin‘s upcoming safaris to Africa please reach out to me at david@ziser.com and I’ll be happy to share the experiences we had over our five safaris to that part of the world.
And speaking of exotic travels, please continue to read my Blog post below about our recent travels to Botswana and South Africa - pretty darn exciting!
That’s it for me today. Hopefully, everybody has a great Fall, and hope I’ll see you again soon.
Cheers for now, David
Posted by David Ziser at 2:44 PM No comments: