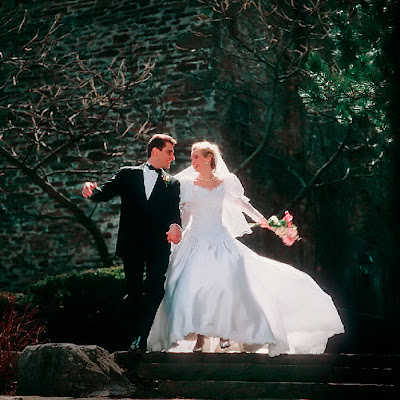 "A Fabulous Day"
© David A. Ziser
This "oldie but goodie" image was created as a catalogue cover for a large wedding album company a number of years ago. The wanted me to create an image that captured the couple's exuberant feelings of their spring wedding. Off we went to Toronto in April - still a little "nippy" that time of year, especially in Toronto. The challenge was to fine a setting and background that had the faintest resemblance of spring. The side walkway of the church filled the bill for me. Fortunately the sun was shining brightly that morning which added to the warmth of the image. But to over come the brightness of the sun and put detail in the couples' faces, two things needed to happen. First I positioned the couple so that they were back lit by the sun. This rimmed them out nicely with the sunlight and put their faces in complete shadow. This let me direct my off camera flash into the couple creating the necessary highlight/shadow ratio to create the proper lighting on their faces. I used a high shutter speed to cut down the affects of the ambient light and show the effective lighting from my off camera flash. We captured just what the client wanted. This image was used as the catalogue cover image for the next several years. Camera specs (to my best recollection); Hasselblad camera fitted with 50mm Distagon lens, F5.6 @ 1/500 second, Kodak 400 ISO Vericolor film. Enjoy! --David
Posted by David Ziser at 4:11 PM