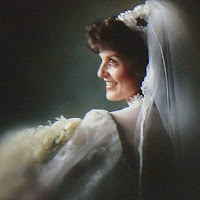 My First "Official" Studio
Last week I shared some images from 1978 - 30 years ago. Let's fast forward a few years into the early 80's. A lot of stuff was going on in my life back then. I had purchased a condo in 1980 from which I could run my business. I chose the condo because for me - image was everything. The condo would make a good first impression to the prospective clients, at least much better than the $150/month apartment I was living and working out of at the time and give me a great tax advantage. I borrowed the down payment money from friends and family, talked the condo development into taking only half the down payment, and signed on the "dotted line." I had no idea how I was going to make the mortgage payment at, get this - 14% interest in the early 80's - and which would commence being due when the condo was completed in about 6 months. I still knew I could make it work out and work out it did. By 1982, I was doing about 60 weddings a year.

Early Training
I never went to school for photography - heck, I already had the Physics and Engineering degrees - but I did chose a different path for my education. In 1980, I started attending every convention, workshop, seminar, and state convention within 150 miles of my "studio." I joking say that I spent as much on these endeavors as one would spend on a 4-year college education. My instructors included Tibor Horvath from Canada; Bill Stockwell - the master of the double exposure; Rocky Gunn - the legendary bridal pictorialist; Monte Zucker - the wedding portrait master, Don Blair - the master of light, Ron Warwick - a great wedding photographer from Knoxville, TN; and Don Feltner - who wrote the book, "How to Make $54,000 in Spare Time Wedding Photography. These were just a few - and I soaked up every word and practiced relentlessly every technique.

Early Sales Training
While picking up as much shooting experience as I could, I was also working on making myself a better business person. I still have a "gazillion" books and tapes on the subject which were truly inspirational to me in starting my business. My first sales book was, "How I Raised Myself From Failure To Success In Selling" by Frank Betger - still a recommended classic with solid information. My other favorite source of business and sales tapes was Nightingale Conat, Inc. - about the best place for this training information. Some additional resources included Zig Ziglar, Brian Tracy, and Tom Peters - check them out right here.

Early Studio Set-up
I learned early on that proofs were not the way to sell photography. I remember attending a seminar by Dale McClintock given by our local association around 1980. Dale showed a slide show of wedding images and I was in tears at the end of the show. Within two weeks I had two Kodak Carousel projectors an A/V deck, and a dissolve unit so I could put together presentations like Dale's. From that point on, my clients were thrilled to see their wedding images at Ziser Photography. The slide show set up was one of the most important transitions for my business. Photogs today still try to sell with proofs - definitely the "Fred and Barney" method of selling wedding and portrait photography. With computers and projectors so cheap today, you are making a big mistake by not making the change - heck, I've been at it for 28 years!

Early 1980's Images
Take a peek at the slide presentation which follows - you can hit pause and play at your leisure. You can clearly see the main influences on my photography at that time. I had spent quite a bit of time studying with Monte Zucker. It was my class time with Monte that really honed my basic portrait skills. Here is a link to one of Monte's online articles on posing the classical bridal right here. It was my goal to present the bride with truly elegant portrait images taken on the wedding day. Yes, I did travel with a backdrop, one large light and reflector fill - it worked like a charm. Check out the bride and groom images in the slide show.

Another influence was Bill Stockwell, the father of the double exposure. We always tried to have at least 5 double exposures in the course of the coverage. It was always kind of fun to see what I would come up with at each wedding. These double exposures were created in the camera. Photographers of the day would expose part of the frame with the first exposure, remove the camera back, advance the shutter, and add the second part of the exposure at some later time in the wedding shoot. Yes, that meant that some of the film backs were actually waiting a while for the next exposure.

Look at the double exposure of the bride looking over the ceremony. The first image was made at the bride's home and then I laid the second image next to the first during the ceremony. How did I block the alternate parts of the frame - I learned from Don Feltner to use a black glove - I preferred a black Foot-Joy golf glove as it had the least amount of sheen and gave me a good blend on the two images. The secret was to overlap the two images by about 20% so that the transition was smooth and you didn't get a black line down the center.

As you see in some of the images, I was very much into back lighting back then too. In the really old days, my camera set at 1/2 second and would also be on a tripod. I would count to three and on three my assistant hiding behind the bride and groom would hit the flash button manually to fire the back-light. By the early 80's, I had acquired a radio control unit which made the process much more full proof and easy.

As early as 1980, I was using a two light flash set up. One off camera flash giving my famous direction of light and the on camera flash supplying the appropriate amount of fill light. All lighting of all posed groups and wedding candids were illuminated with the two light set up. Hey, that was 26 years before the Strobist was showing photogs how to pull the same thing off! (But at least more photogs are seeing the benefit of off camera flash thanks to Mr. Hobby.) The second light was a big "differentiators" for me since most photogs, even today, only use one light source.

We always wrapped the coverage with the wedding rings in the bridal bouquet. I would place a "tube of mirrors" - a device call a "spectral highlighter" - with close up lens over my 80mm lens on my Hasselblad and light with the off camera flash to get the image. It was a dramatic close to the wedding coverage.

That's about it for this week. Tune in next week when I show you some of my outdoor engagement sessions. It will be fun, too.
Posted by David Ziser at 4:13 PM