How About 200 Opportunities To Be Inspired 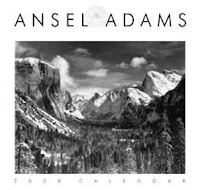 200 Ansel Adams prints to be auctioned by Christie's in New York City on April 11! I just caught the notice over at JMG-Galleries. I actually talked to Ansel Adams over the phone many years ago. He was having an exhibit at the Indianapolis Art Museum and I was such a fan I wanted to take pictures of his pictures. I put a call into the museum to ask for permission but they said not unless Mr. Adams says it's OK.

Heck, what did I know, I got his phone number from directory assistance - yes, it was published and I gave him a call. He answered, I was in "Shock", but made my request - he say no problem. Now I was "floored". I thanked him graciously and headed to the Indianapolis Museum with camera in hand. I was stopped by the guard when I raised my camera to take the photograph, but mention my conversation with Mr. Adams and he let me continue.

Christie’s is scheduled to sell about 200 silver-gelatin Ansel Adams prints from a corporate collection in California. It is among the largest Adams collections in private hands. Man, I'm such a big fan, I'd love to bid, but considering the larger pieces are going for anywhere from $150,000 and up, I might forgo this opportunity. I sure would like to see the bidding though. You can read the entire New York Times article here.

Hey gang, That's about it for today. I'm packing my bags, loading my cameras with a few million pixels, shooting my wedding over the weekend, and heading to Las Vegas early Sunday morning. Hope to see you at the WPPI Convention. Have a great weekend! --David
Posted by David Ziser at 6:32 AM