Boy, stories like this really get my "dander up" - mainly because it's only half the story. The story presented at WEDPIX Magazine correctly states that wedding photography started with the bride and groom and sometimes the wedding party heading over to a photographer's studio for a series of formal bridal portraits. The article also correctly states that after WWII the discharged army trained photographers were looking for work and began showing up on church door steps looking for weekend weddings taking place. I discussed it last week right here.

In the 50's most wedding images were made with 4x5 cameras and some roll film Rollies. As the equipment became smaller and lighter, nearly all the photographers switched to the Rollies, Koni-Omegas, Hasselblads, and Mamiya medium format cameras. My first wedding was shot on a Yashica A in 1966. Around that time, a photographer by the name of Bill Stockwell was introducing double exposures, misty's, buttercups.... Bill had a slew of names for his soft, vignetted, multi exposed images. He conyinued doing this style of photography into the 60's and 70's. And, it started catching fire becoming the "hot" new trend among the new shooters. 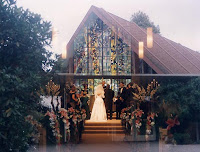 Bill hit the lecture trail and that added even more to the changing face of wedding photography. Bill was one of the first lecturers at WPPI early conventions in 1981. He was the legend, the man to emulate at the time and had influenced many photogs with his books and seminars. I had the chance to see one of Bill's last programs. He was energetic, enthusiastic, passionate about photography and still able to fire up the crowd.
Try as I might, I could find none of his images available on-line. I own one of his early books, but lack of a good Dewey Decimal system on my collection did not make it readily available to share with the readers of this blog - I'm still looking. When it resurfaces, I'll make a few images from it's pages and show you the man who had the first major influence on our profession, at least for the wedding photographer. Next week, Bill's students become the next masters. See you then.

Hey gang, that's it for today - we are heading back for one last tour of the trade show and a little R&R for the rest of the day. See everybody tomorrow. Have a great one! -David

Thanks to Nadine OHara for double exposure.
Posted by David Ziser at 7:49 AM