"View From The Top" 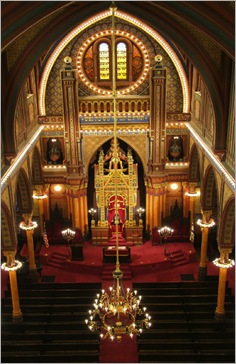 "View From The Top"
©David A. Ziser

This is a one of a kind image.  It was made a few years ago when Plum Street Temple’s 1866 Koehnken pipe organ was going to be restored.  The “pipe organ” story is another story all by itself.  This historic musical instrument was being entirely dismantled and removed from the Plum Street Temple for about an 8 mouth restoration process.

During that time, that part of the synagogue was going to be completely renovated. In order to complete the restoration, scaffolding was installed from floor to ceiling where the pipe organ was originally installed. It reached to the top rafters of this historic landmark.

I received a call from the contractor, whom I had known,  doing renovation.  He asked me if I would like to climb the scaffolding and see some never before views of the temple.  I quickly said “yes”, grabbed my camera, and met with him at our agreed time.

The climb to the top was exciting but the final view was truly amazing. I made an entire series of images at different heights of the climb that day.  This image is from the very top.  It is the most breathtaking view of the temple I had ever seen. This vantage point is at least 40 feet higher than the balcony I normally photograph from for weddings and Bar/Bat Mitzvahs.

The shot was made out of a small opening far above the top of the pipe organ.  I had to lean out and stretch to capture the image.  There was no room for tripods so the entire photography session was completely handheld.

The pipe organ has since been restored and replaced –it sounds magnificent.  You can here it played right here. The space that was once open is again completely inaccessible.  How often do you get to make that “once in a lifetime” shot.  Don’t miss the opportunity if it comes your way.