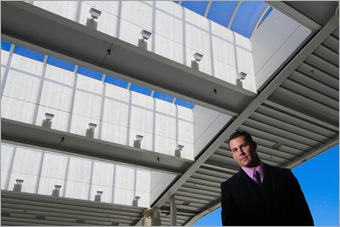 "The Convention Manager"
©David A. Ziser

Here is another shot from my wedding Pre-Con shoot while at Photoshop World.  I mentioned yesterday how much I like the “design” lines of this Orlando Convention Center.  We were doing a little shooting around the “spaces” on the way to the buses.  We received word that the buses were running  a bit late so I kept shooting around the convention center.

As we exited the building on our way to the escalators down to the buses I noticed the bright shapes and forms of the building’s exterior.  I liked the brightly lit rectangular areas capturing sections of the blue sky. I also liked the diagonal lines running through the scene.  I thought, “What a perfect place for an “executive portrait” .

I asked our model to stand in for the portrait shot. I positioned him in the fourth quadrant of the frame against the larger shadowed diagonal element on the right side of the scene.  This served as an interior frame for him and also leads the viewer’s eye easily toward the subject.  The other elements simply balance the rest of the composition.

Lighting was a bit tricky.  I dialed down the ISO to 200 in order to hold the color in the sky.  The higher aperture and faster shutter speed gave me the sky tonalities I wanted . Now I just needed to obtain the correct exposure on my subject.

That was accomplished by pumping my Quantum flash up to full power and getting it as close to my subject as possible.  At full power – about 150 watt seconds – I was able to put the correct exposure on my gentleman while still maintaining the detail in the sky and overhead structures.