Don't Throw Me A Curve 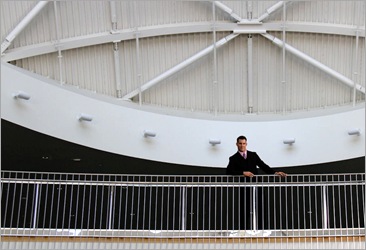 OK, you are probably getting the idea that I like the lines at the Orlando Convention Center.  Walking around here is certainly a really good way to practice “seeing” compositional elements and directions. I first visualized this shot with the groom center positioned in the shot. I had originally positioned him on the resting point (lowest point) of the horizon line defined by the structure behind him - he is still on that “resting point” or lowest point of the curve. After I reframed the shot with with him at “nodal point #4” in the composition, I liked it better.  Notice that I have him looking camera right and illuminated him from the same direction.  Now we have the leading lines coming in from the opposite direction, which I feel, adds motion and more interest to the image.  One might think the photograph would have been better framed with the leading lines coming in from the right, but I still prefer this composition.  Hey, beauty is in the eye-of-the-beholder.  Camera specs: Canon 7D fitted with 18-200mm IS lens at 50mm, F6.3 @ 1/250 second, ISO 800.  Enjoy!  -David