In my early film days of wedding photography, when photographing the banquet room, one never just took a time exposure of the room. Contrasts were always too severe and we didn't have Photoshop to save the day. Also, if you were going to give available light a try, you needed to use tungsten balanced film to get the proper color balance.

The way I handled the situation back in those days, was to paint the room with light. Here is how we did it. Place the camera on tripod and set the F stop at about F16. I would fire up my 200 W.S. flash, give my assistant the cue to release the shutter with the cable release, holding the shutter open as I moved throughout the room flashing the strobe at different areas of the scene. The main thing to keep in mind was to be sure that the flash head never points back into the lens, and move quickly so that the entire room can be covered in about 30 seconds.

Also, try not to silhouette yourself against any bright surfaces like table linens - that was mainly accomplished by keeping the strobe pointed at about 135 degrees away from the axis of the camera lens. The finished result looked like if was illuminated with about 8 separate strobes and looked great. 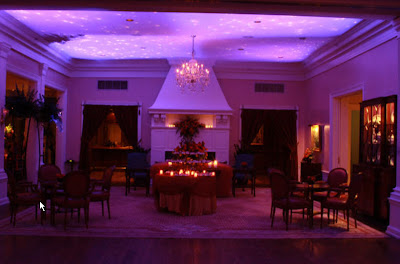 I haven't tried this with digital until just a few weeks ago. Take a look at the first image - it's a straight available light image for the room. It looks OK, but not great. Now look at the second shot. It was the result of about a 20 second exposure at F16 made with about 4-5 flashes of my flash. Look how I was able to spot light different areas of the scene focusing the attention to the cake table since I gave it the most light. 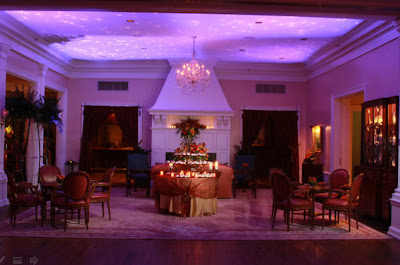 You can get some great results in really dark surrounds. Check out an article over at the Strobist right here for some more discussion on the subject. It's a cool technique that has sort of fallen out of favor these last several years, and probably is still used by some of the commercial guys out there. Give it a try - it's a great way to get light on the scene right where you want it.
Posted by David Ziser at 9:05 AM

Email ThisBlogThis!Share to TwitterShare to FacebookShare to Pinterest
Labels: lighting