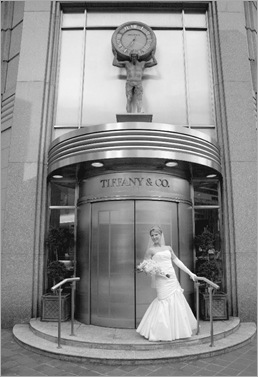 The bride and groom were from out of town but loved coming to Cincinnati, Ohio for shopping and just plain hanging out. They were very specific in our planning sessions that they wanted several photographs throughout the downtown Cincy area.The wedding was taking place at a downtown hotel, and the couple had no problem seeing each other before the ceremony. This allowed me plenty of time to roam the downtown area and capture some great shots for them around the various Cincy landmarks - shopping landmarks included ;~)

We were on our way back to the hotel and I suggested a shot in front of Tiffany's. The problem was the curved reflecting surface of the big front door. Although I wanted to "put a little light" on the subject, there was just no place I could position the light to avoid the reflections on the door. I opted for no flash at all. Making the photograph B&W made for a very appealing image because of all the shades of grey throughout the composition.

Positioning the bride diagonally in the scene at the fourth nodal point (bottom right quarter of the scene) worked very well compositionally with the centered symmetrical framing of Tiffany's entrance. The bride loved it. Camera specs: Canon 40D with 18-200mm IS lens at 18mm, F5.6 @ 1/400 second, ISO 500. Enjoy! -David