It's the "Whip cream and cherry on top" for the new Canon cameras. Highlight Tone Priority - it's one of those new features that get listed in the specs but receive little"real world" discussion as to how it applies to the wedding shooter. Well, let's change all that right here. This is the hottest feature of the new Canon (and Nikon) cameras just announced last month. It makes JPEG shooting pretty darn easy - almost full proof in my opinion. Even if you are a RAW shooter the benefits are unbelievable. My buddy, Denis Reggie shoots RAW but still has Highlight Tone Priority enabled all the time.

I was shooting a wedding two weeks ago with Canon's MarkIII with Highlight Tone Priority enabled. The bride came out of the house on this super bright, not to mention hot, cloudless day. I had the camera in "P" - for Professional mode - and shot away. I "chimped" the shot and could see no "blinkies" on Canon's new "all screen" "blinkie" mode. I know they call it "Highlight Alert" - but it's still the "Blinkies" to me. The full screen view of "Highlight Alert' is the second best thing about the new cameras.

Now any good wedding photographer knows that when shooting the bride leaving the house or limo or any other "inside" location moving into full sun is a bit of a problem. Shooting JPEGs in any "auto" mode always results in the dress highlights being "blown out". As a JPEG shooter, we always make the slight adjustment to exposure before she makes her exit. This is fine when we have the time, but it can be an "exposure" hassle when things are really moving. Now I know the RAW guys are going to say they don't have the problem - granted - but the RAW vs. JPEG issue for photographers is another whole discussion saved for another day.

For the JPEG wedding shooter especially, a camera with the "Highlight Tone Priority" feature (it's called Active D-Lighting on the Nikon side) is just about a must and a life saver. This feature alone will save a large percentage of the possibly overexposed images in the course of the day's coverage assuming, of course, you are "in the ball park" to begin with - and the "auto" modes get you in the "ballpark" fairly easily.

Let's take a look at some of my "hands on" shooting during last week's Master Class. I asked our bride to step out of the shadows into the sunlight. The camera was in "Program" mode. Look at the first image - the image and the histogram shows it is clearly "blown out". 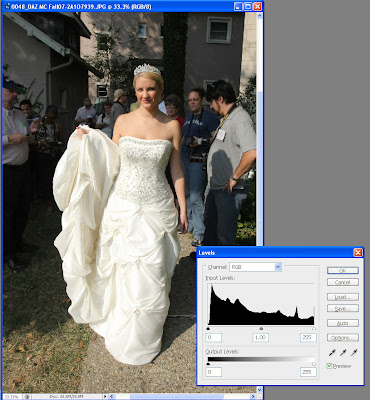 Next I "enabled" the "Highlight Tone Priority" feature on the MarkIII, had the bride step out of the shadows into the sunlight again as I continued to shoot away. Check out the second image - the exposure is just about "nailed". Look at the histogram - it's right where it needs to be. 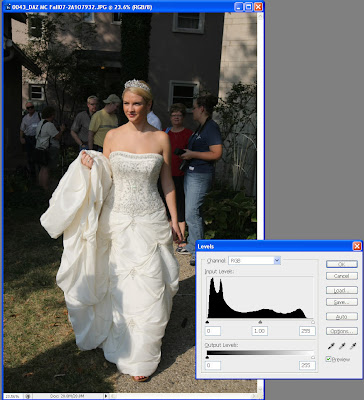 Now look at the third - full length - and fourth - close-up - images. Look how the dress detail is preserved beautifully with the the "Highlight Tone Priority" feature enabled - Amazing!!! 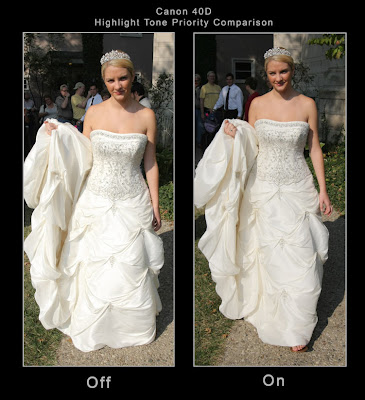 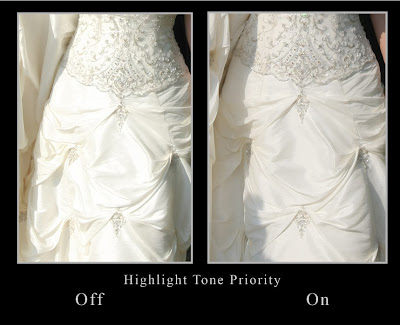 So just how far can you go before you go beyond the range of this "safety net" feature? I'd say about one stop. Take a look at the fifth image, which I published in my newsletter a few months ago. the difference between exposures was one stop. The overexposed photograph was still saved by the "Highlight Tone Priority" feature. 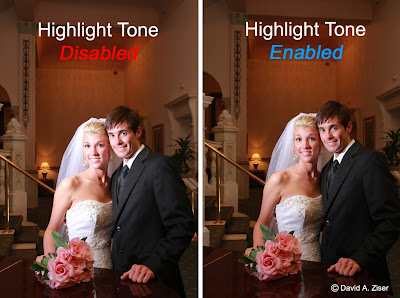 Don't overlook these additional benefits too. When doing the "cocktail candids," we are sometimes in fairly tight quarters. We may be shooting a group only a few feet in front of us with the 17mm-85mm lens at 17mm range. The on-camera flash may over expose about 1/2 stop. We've known this and (most of the time) make the necessary adjustment, now HTP saves the day and takes the worry and "exposure fiddle" out of the picture - no pun intended. Here is a further benefit too - hot August day, outdoor shoot, bride and groom and wedding party a bit "shiny" from the busy day's activities. HTP even reduces the facial shine. This saves us in the post-production work. This is actually demonstrated in the fifth image of this article. Wedding day shooting is aways fast, uncertain, changing, and exacting. I'm glad I have one less thing to worry about. Let me say that HTP is not an excuse for sloppy exposure but, the new "Highlight Tone Priority" feature does a marvelous job! Happy Shooting!
Posted by David Ziser at 7:50 AM