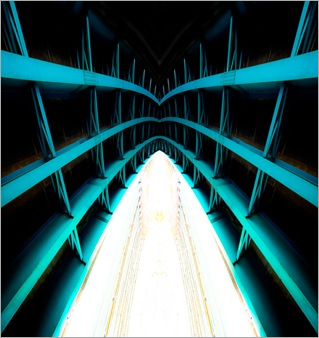 Here is one of the images I captured during our PhotoWalk on Saturday.  Well, the original image was made on Saturday ;~)  As we were about to cross the bridge into Kentucky, we had to pass under the expressway overpass.  With my Sigma lens I had a very wide view of the expressway beams above.  The original image did not thrill me that much because there was just too much “other stuff” in the image.  Working it and trying about every slider in Lightroom 3 only partly solved my problem. I was getting the colors I wanted but the image still didn’t “sing” for me.  I just wanted to eliminate the white tones from the image.  Then I thought, “How can I make the white tones work for me?”  One more tweak in Photoshop and I had the abstract image I wanted. Camera specs: Canon 7D fitted with Sigma 8-16mm lens at 8mm, F 5.0 @ 1/40 second, ISO 100.  Enjoy! (I hope)  -David 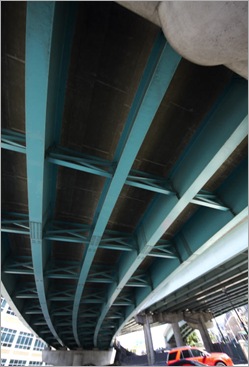 Here is the “Before” shot.  Interesting, but needing a little work, don’t you think?  -David