Technique Tuesday: My Cheatin' Light - Or How To get Your Flash To Sync At Higher Sync Speeds Than Normal, and Alligators On Location

Good Morning Everybody,
Wow! What a day we had yesterday! Great models, great images, and a great time. We hooked up with Jason, NAPP's top dog videographer about 10 a.m. sorted the day's shooting schedule, and headed out with the rest of the crew, Adam and Steven. Whew! We didn't wrap the shoot until about 7 p.m. but were able to create some terrific images and great info for the Kelby Training videos.

My plan was to work in some of that famous Florida sunshine at the worst of times - high noon - to show how we wedding photographers need to still get the shot under less that optimum conditions. Nature had different plans for us though. The clouds rolled in and we had about the prettiest light ever for just about the entire day. The good news, I shifted gears and talked about how to find the best light and use it to create some outstanding, set yourself apart from the crowd images. We did capture some amazing photographs and tutorial. 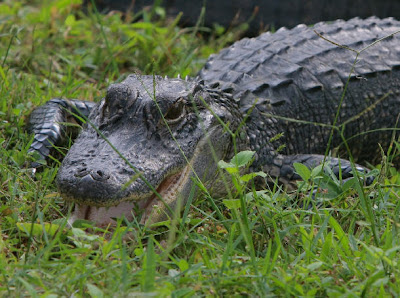 We did have a small afternoon surprise though. We were just landing at our second park, started to scope out locations, and ran into an alligator just chillin' in the grass at the side of the water. We, like all goofy tourists, ran toward the gator instead of away, because we wanted to get the shot. We did, the gator didn't care to much, and we continued shooting with everybody watching each other's back the rest of the afternoon. I have to say, alligator time was about 5:30 p.m. and the light was just beautiful - you'll have to check out the video when it goes live. I'll give you the head's up when that happens.

How about on with our Technique Tuesday episode - last week I posted an image entitled, "Afternoon In The Park." It received the most comments ever with the commenter's questioning and explaining how I took the shot at 1/400 second, especially when my Canon 40D which only syncs up to 1/250 second. Let me say here and now, thanks to all who were in on the discussion.

Anyway, that lead me to today's tutorial - My Cheatin' Flash. Why the title, because that's what it's called - cheating the sync. This is one of my favorite techniques to get those dramatic outdoor bridal images I sometimes post as our image of the day. The technique is best used when working in bright sunshine outside and you really need the scene or sky darkened to add to the dramatics of the shoot. In fact, I was using that same technique yesterday during our shoot. So, if you want to hear the rest of the story and see exactly how I pull it off, hit the PLAY button below to see how it's done. Enjoy!