Rocky Gunn, shown here (about 1980) in the middle with Monte Zucker and Bill Stockwell Sr., was born Roderick Wong Gunn in 1940. He was the next major influence over the entire wedding profession in those late 70's and early 80's. He had the talent to pull off a "Monte" portrait and understood light implicitly. Part of this knowledge may have been the result of Rocky's brief experience in the movies. That's right, Rocky played in The Return of Charlie Chan in the late 70's. Rocky was the photographer that popularized outdoor wedding photography. He was from the Redondo Beach area where there was not a lack of great outdoor locations and beautiful weather most of the year.

Rocky's reputation was spreading internationally as he was giving seminars around the world. I had the chance to study for one week in 1980 - I was blown away by his imagery. It was always a combination of dramatic setting with an easy pose of the bride and groom. Everybody was trying to emulate Rocky's style - myself included. 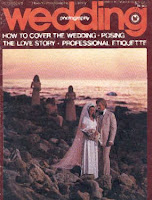 On thing I learned from Rocky was that beautiful wedding photographs did not have to be taken on the wedding day. In many cases, Rocky would schedule to meet with the bride and groom a day of two later. They would head to one his drop dead gorgeous locations and shoot away. We instituted the same policy in my own studio in those early 80's. The only difference instead of a day or two after the wedding we photographed the couple a week or two later. That way, we could guarantee beautiful outdoor wedding images even in the Midwest.

Since Rocky was traveling the world giving programs, he had put together quite the international portfolio of wedding images. He was featured in Life magazine in June 1982 - the first wedding photographer of non celebrity types to be featured. Rocky passed suddenly of a heart attack at the very young age of 43 at the peak of his career. I aways thought Rocky did it all - portraits, dramatic outdoor imagery, great lighting, easy posing - and ran a very successful studio as well.

The photographer today who most emulates Rocky's style is one of his early students - my friend, Hanson Fong. Check out his galleries right here and you will see the Rocky influence. Hanson has some really beautiful images.

I've spent hours searching the Internet for info on Rocky, but there is so little to be found. Somewhere in my archives, I have several of Rocky's images. When I come across them, I'll do a followup to this post.

That's it for today, everybody. I'll see everyone tomorrow for another Business Day Thursday. See you then, -David
Posted by David Ziser at 12:45 PM