Finding Grace - No, Not the TV Show on TNT

Inspirational photography of extraordinary people - here is the story. Multi-gazillionaire and President and Chief Executive Officer of ACS, Lynn Blodgett, has produced this amazing collection of images - 140 in all - of homeless people which was released in 2007 and has been called one of the best photography books of the year by PopPhoto.com - here is the story. 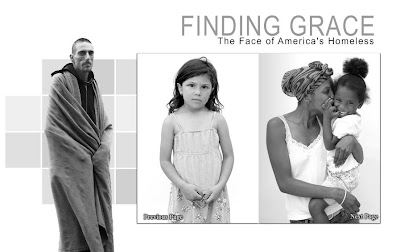 Don't get the wrong idea here, this isn't rich man photographs poor people to get famous. Lynn has had a love of phtotgraphy and considers himself an amateur photographer since he was a kid. At a recent workshop in which he participated, he produced some really compelling images according to Andrew Eccles, the course instructor.
Encouraged by this experience, Lynn began his journey. He would get out of his car in areas of towns where homeless people gather for shelter and protection, set up a white seamless background and begin photographing anyone who would stand in front of the camera. The images are a peek into a part of the world most of us would shun and try to ignore. But the result is that Lynn found the humanness in these people and his portraits truly reflect it. Check out the Finding Grace website site right here for the entire story on Lynn and the book.

Lynn's efforts have resulted in the founding of Finding Grace Homeless Initiative which is an emerging coalition of individuals and organizations aiming to increase awareness and raise money for homeless organizations. Check out several of the images inside the Finding Grace book right here. A must see.
Posted by David Ziser at 3:01 PM