"Hot Times In The City" 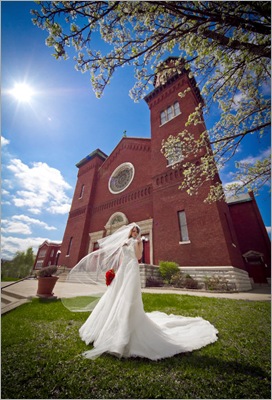 "Hot Times In The City"
©David A. Ziser

I captured this image this week during my Master Class.  We were working at St. Augustine Church in an old working-class neighborhood nicknamed Peaselburg a part of Covington, KY. This is quite a historic church and as been standing on these grounds for many, many years. Although the architecture inside was quite beautiful, I really wanted to work against the red brick of the church  exterior.

It was about two o'clock in the afternoon and the sun was quite high in the sky. The thing I loved about the scene was how the blossoms of the tree swept across the top part of the church in the viewfinder.  My first inclination was to grab the wide angle lens so that I could capture the sweeping lines of the tree branches crossing the top steeple of the church. The wide-angle lens also captured the sun as well, and that might be a problem.

Lighting the scene would be difficult. Because I was shooting directly into the sun I knew that I needed to get exposure on the front of the church and also the bride's face. The easiest way to do this was to bounce some light back in the bride's face with my Sunspotz reflector coming in from camera right. One of our class members held reflector, bounced the sun’s rays back onto the bride, and I captured my photograph.

Using my Sigma 8-16mm lens at it’s widest setting added an edgy distortion to the final photograph.  I was also a bit heavy-handed with the Lightroom sliders sliding the “Vibrancy” slider about 80% to the right and then heading down to the Blue channel and saturating the blues even more. Overall I think that oversaturated colors, the low camera angle, the swirl of the veil, and a very wide field of view created an intriguing image.