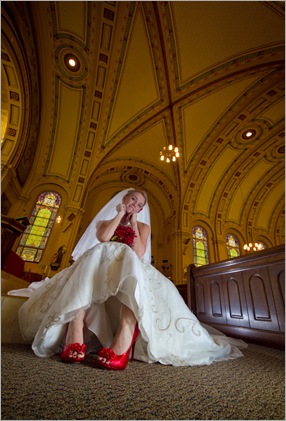 This is one of my favorite images from yesterday’s Digital Master Class shoot.  One of our models wore these really cute red shoes and I wanted them to feature prominently in a photograph.

The low vantage point together with the use of a super wide angle lens worked perfectly for the situation by accentuating the shoes in the foreground of the shot.

The challenge was to get the composition elements right.  There was just too much “stuff” around the area where I needed to get the camera so it was kind of “hit or miss” framing up the image as I couldn’t look through the viewfinder.  I just placed the camera near the floor, hoped I framed up the subject correctly, and shot away.  After a few tries, I had the image I wanted.  I’m thrilled with the composition of the image.

My lighting was a bit different than my normal set up too. I used a 580 EX II through my Zumbrella camera right as my main light.  I had a very small strobe positioned behind my bride for an accent backlight, and I had a third 580 strobe camera left and slightly behind the bride just skimming across her from behind.

The combination of all three strobes gave me an image well lit, and nicely defined from the background.  The finishing touch was to balance the ambient, underexposing it just a bit, which emphasize the subject within the scene.