It's a late post today - I'm just happy I got it up.  We had the class out for 14 hours yesterday and all of us, including yours truly, is dragging just a bit today.  We had a great time shooting and got some fantastic images I’ll share with you tomorrow.  The BIG news from yesterday is an unbelievable story, but with a very happy ending.  Please read on...

Yes, it's true.  One of our coaches, Craig Weiglein, was working in one of our favorite locations, Garfield Park, in downtown Cincinnati. Yesterday it seemed that we had more than the usually number of colorful characters in the park.  Every year we have a few, and generally don't have much of a problem.  Yesterday was different with 8-9 "colorful" characters sleeping, smoking, cat calling, etc. during our shoot. 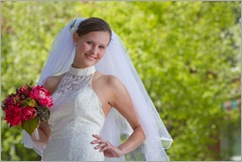 One individual was paying particularly close attention to Craig's group as he demonstrated lighting and posing.  This individual was not saying much to the class, but was watching intently.  All the gear was placed together and one of the class members stood guard during Craig's instruction.  All seemed fine. It's common sense to keep tour eye on your gear when working in a public place.  My rule is that my gear bag is never more than 3 feet from my side when I shoot.

It was then that Craig set his camera on the nearby ledge in the Park, and approached the bride to make some final adjustments and point out to the class what he was trying to accomplish in this photograph. All the attention was focused on Craig, the bride and the lesson he was trying to teach. It was then that the questionable individual made his move. He dashed across the street, grabbed the camera, and let off for places unknown. Needless to say, it put a damper on the session when everyone realized what happened. Craig hailed a nearby police car, jumped in, and they both proceeded to search the area for the perpetrator. 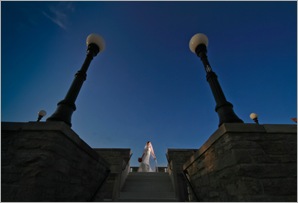 Craig called my coordinator, Jim Fausz, to fill him in on what  happened. The news was starting to spread throughout the whole class and we were all starting to feel pretty bad for the loss of Craig's camera. Stephen, another one of my coaches, was contacted by Jim to fill him in on what happened. Stephen, who had his gear stolen just about a year ago in New York City, leapt into action. He asked Jim to cover his class as as he left into action and sped off to the nearest pawn shop. Stephen, as it turns out, knows a pawn shop would not accept the stolen gear. It seemed that they had to turn in a report of all pawned items to the police at end of the business day. He knew that they would try to make it to a swap shop, which does not have such restrictions.

Stephen located a pawn shop and quickly asked for directions to the nearest swap shop, which was about two blocks away. He quickly headed down to the swap shop. To his surprise, there was the guy with Craig camera standing there just about ready to swap it out. Stephen confronted him, and he admitted he had taken the camera, and the police were called. The unbelievable happy ending to this story is that the guy was caught, fingerprinted, and within about 45 minutes Craig had his camera back in hand. 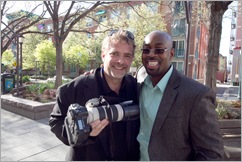 In all the ensuing confusion, Stephen called Jim to let him know what had just happened. Jim contacted a very forlorn Craig and made his day with the news. So, a big thank you goes out to Steven for his quick, intelligent, swift action.

Anyway, we got back on track in the class, everybody jumped on the bus, and we headed to our second location that day. The day wrapped with all of us getting some great photographs at one of the local parks, and then finally up at Drees Pavilion, which overlooks the Ohio River Valley -- a beautiful sight at twilight.

Hey gang, that’s it for me today. We had a great shoot and I can't wait to share the particulars with you. I included a couple of images in this post, but I really want to take some time to fill you in on some of the behind-the-scenes challenges we faced. Once things slow down around here I should be able to have a great post for you next week. I'm looking forward to it.

On that note, I’ve got to get back to class cause we've still got a full afternoon. Then at 6:30 this evening everyone will be coming back to our place where we all be enjoying a wonderful dinner. And especially good news -- the weather is great. I think we’re all looking forward to a little R&R this evening.

Hey gang, got to go.