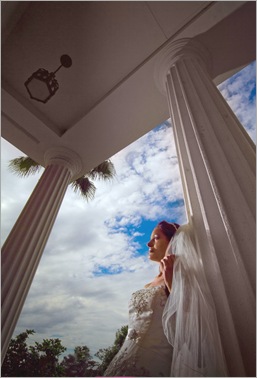 Today marks the first day of my Digital Master Class so I thought I’d kick off this week’s image of the day with another image I created two weeks ago at my Wedding Shootout at Photoshop World.

For me, it’s always about the the light and how we can use the light to add some dramatic impact to an image. In this image, we stepped out of the church into the bright Florida skies.  From the shadowed part of the church’s entrance, I had a great shot of the bride and the clouds in the background.  The problem was that if I exposed for the bride, I would blow the sky away.

My strategy was this – first determine the exposure of the sky.  I need to use the fastest shutter speed I could get away with and then see where the F-stop fell.  I knew I could cheat the sync up to 1/400 second but even at that shutter speed, my F-stop was still going to be quite small. That was the challenge and I had to make it work.

I brought in my off-camera Quantum flash at full power, as close as I could be to the bride without including it in the image – it was just out of camera range camera left.  That seemed to do the trick.  I created great lighting on my bride while still preserving the detail and color of the sky behind her.  The super wide angle lens added further to the impact of the image.