"Turn Around, Look At Me" 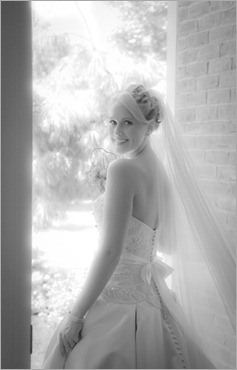 "Turn Around, Look At Me"
©David A. Ziser

This is an image I made last year.  I was reviewing it for another project and stumbled upon this image which I like a lot.  I was shooting several available light images around their home, hence the high ISO you’ll see below.  The bride started heading out the door to get into the waiting limo.  I called to her an she turned and I captured this image – great expression, soft tonalities, all the qualities of a nice wedding photograph.

It was in the post processing that the final image came together for me.  I de-saturated the image then kicked the Fill Light slider to about 40.  I just like that kind of soft, airy look in my B&W images.

The finishing touch was to slide the Clarity slider all the way down to –77.  Because of the tonalities that the Clarity slide affects, you get almost a kind of “halation” effect we got back in the film days when the background was super overexposed.  For me, the –77 Clarity setting just added that last little bit of softness and airiness to the image.

p.s.  Hey gang, I got the image up today but I’m bailing on the second post.  We are heading to the airport shortly and time is at a bit of a crunch.

How about I see you bright and early on Monday.  Have a great weekend and I’ll see you then,  David