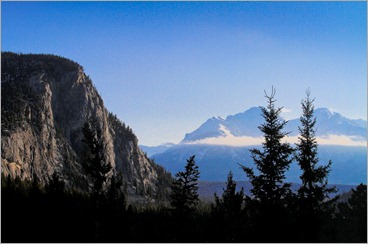 I didn’t mention it, but this image was taken out our hotel window yesterday morning.  Yes, we do have a room with a view and the views have been unbelievably beautiful.

They say; “in Banff that if you don’t like the weather, just hang around 5 minutes and it will change”.  They say that about many other locations around the world too, but here in Banff, it is certainly true.  We have seen the town socked in with snow and fog and 30 minutes later, the sun would begin to break through and the fog lift revealing some gorgeous sights.

The same was true yesterday morning – the sun was shining brightly on the mountains and a short while later we were socked in once again with dense clouds and snow beginning to fall.  It has been a wonderful weather experience, especially if you’ve never experienced it before.

Let’s get back to this image.  I think it’s representative of a really good landscape image.  We have the mountain in the foreground proudly exerting itself into the composition – full of color and definition.  But now look at the “big brother” mountains in the distance. They are truly rising to the occasion in this image. Clouds are surrounding the peaks, the blue ultraviolet cast of color implies their dominance and presence in the scene.

I tweaked the image with Perfectly Clear, an image enhancing program I’ve been waiting to try for the last few years. Brad Malcolm, the owner of the company, was at the Canadian Imaging Tradeshow and we hooked up to discuss what he had cooking. I have to say, I like what I see so far.  The software just seemed to make the image really pop.

Foreground and background reciprocate the message that this is indeed a wonderful place to witness the miracle of this wonderful world in which we live. Lose the headlines, CNN and FOX news reports and revel instead in the beauty and majesty of what abounds around us – right outside our hotel window!

We are hitting it hard today for the next 11 hours too – I’ve got three sessions after the early bird shoot, wrap about 5:00 p.m. followed by the awards banquet.

It’s a gorgeous hotel with some spectacular places to shoot – I can’t wait!  I hope to have a few cool images from today’s shoot ready for you tomorrow.