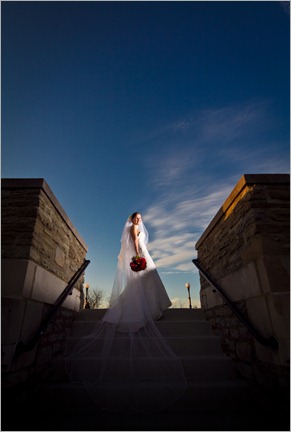 Here is another image I captured during my Master Class a few weeks ago.  We were working in one of the most popular parks in the city for wedding photographers, Ault Park.  During the busy season you could find yourself, along with as many as 4 or 5 other photographers vying for that best location for their wedding photographs.

This image was made on top of the pavilion, a place not selected by many photographers.  It’s usually in the direct sunlight making it fairly challenging to capture a good photograph.

We were lucky on this day.  The sun was above the horizon but still fairly low in the sky coming in from camera left. I still needed to get the bright rays off my bride so I had one of our classmates hold a large translucent umbrella out of camera range, just to camera left.  That, in effect, cast a shadow on the back of the bride that you don’t see. And that, in effect, eliminated the sun’s bright rays from the back of the dress.

Now all I had to do was light the front of the bride.  That was easy – I just brought my full power flash in from camera right at the correct position to create my loop lighting pattern on my subject. The low ISO, small aperture, and faster shutter speed underexposed the blue sky a bit adding the rich blue color to the background.

The lighting, camera settings, and wide angle lens all combined for a fairly dramatic portrait of our bride.