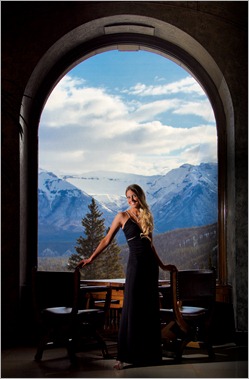 "Stepping Out"
©David A. Ziser

This is an image I made yesterday during my Early Bird photography session. Jenna was a very beautiful young lady who filled the bill nicely as our model.  She wasn’t dressed as a bride but her attire suited the scene and the shoot perfectly. Her look of elegance against the majestic Canadian Rockies in the beautiful Banff Springs Fairmont Hotel produced what appears to be a magazine shoot at first glance.

Here was the challenge – I needed to balance the brightness of the mountains in the distance with the lighting on her.  It was almost like shooting her outside since the outside scene figured prominently in my composition.

I needed faster shutter speeds, lower ISO’s and smaller apertures to pull it off.  I decided to “cheat the sync” up to 1/400 second so I could use a larger aperture and not stress my strobe too badly.  I was using my Canon 580 EX II shooting through my Zumbrella, but the Zumbrella was soaking up just a bit too much light for this image so I had to lose the Zumbrella and shoot direct flash.  That in effect, gave me two more stops of light to work with.

Compositionally I wanted Jenna figure in a pleasing and flattering “C” curve line.  From the top of her head to the tip of her toes you can trace a “C” line throughout her body.  I also wanted her positioned between the two mountain valleys you see in the distance. Her centered symmetry in the scene accentuated with her placement against the background gave a very striking image.