"Spring Is In The Air" 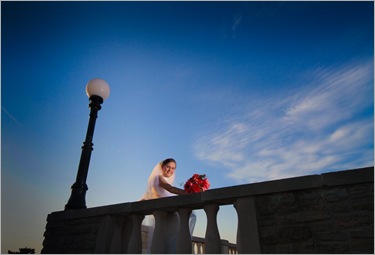 "Spring Is In The Air"
©David A. Ziser

I love this photograph. It was one I made during my master class yesterday afternoon, in the park. The weather turned flat out beautiful -- what a perfect day for shooting. I was demonstrating composition with wide angle lenses and wanted to show how we could create a fairly dramatic image in a simple park location.

I thought the use of the wide angle lens would create some dramatic diagonal lines throughout the scene, which it did. I also had a small wisp of cloud in the sky, which I thought would add some structure to that part of the scene.

The challenge was to get some decent lighting on the bride about an hour before the sun was setting. I chose to turn the bride away from the sun so I could put her head in shadow. With her face in shadow I then knew that I could add some artillery flash, which would give me a lovely loop lighting that I so prefer.

The bright ambient light necessitated that I use a much smaller aperture and a fast shutter speed to make that happen. That meant that I needed a lot of light coming from my off-camera flash. Once I had the image composed in the camera, and full power on the flash, I fine tuned the bride’s head to be sure that no part of her face would be catching any part of the sun setting camera left, and shot away.

With the faster shutter speed and the smaller ISO, we got a particularly rich sky. That coupled with the beautiful lighting on her face, the low angle, and the dramatic use of the wide-angle lens made for a very beautiful bridal portrait in the park.