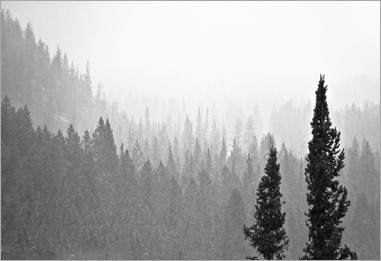 I captured this image the first day we arrived in Banff.  The entire area was still covered with snow that should have been long gone weeks ago.  It turns out that the area has experienced the most snow in 50 years.  Even the skiers were saying, “Enough already.”

Anyway, to this Mid-Westerner, the view was extraordinarily breathtaking.  It was a long trip to Alberta and once here we had a few chores to complete.  It was about 7:00 p.m. Mountain time when we relaxed and took our first break.  We headed for the lounge for an adult beverage and dinner.

As we sat there, the snow began falling, slow at first and continued to pick up with large feather-like snowflakes softly falling. It was a beautiful winter scene and we had seats front and center in the restaurant’s second story.  I grabbed the camera and began shooting away.

The eye seems to dance across the image but is still anchored in the scene by the two evergreens in the foreground.  Black or white or color, the scene still looks beautiful to me.