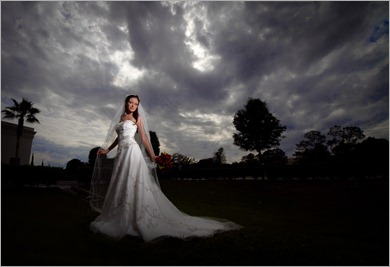 Here is another image I made during my Wedding Shootout on Tuesday. I tell ya’, the weather has not been the best so far this week here in Orlando.  It rained most of the day before, and I was really worried about being able to get outside to shoot on Tuesday.
The good news was that the weather let up slightly later in the afternoon, and the sun even tried to peek through the clouds.  The class and I took that opportunity to try to get a fairly dramatic image of the bride against the parting storm clouds.
The church grounds were not the best to get a great bridal image – too many telephone poles and power lines in the distance, but we still pulled it off – with the help of Photoshop’s “Content Aware Fill” tool.
My light was actually in the top right corner of the image but with a little “content aware fill” magic and it was removed instantly.  Why was the light in the image – because I needed to get my light source close enough to the bride to overcome the very bright ambient light we were dealing with. Check out camera specs below to see what I ‘m talking about.. I always say, “If you need to have your gear in the shot, be sure it is in a ‘Photoshopable’ area so that it can easily be removed later”.
Notice, too, with the light so close, it created a spotlight effect on the bride which I think adds to the dramatic feel of the image. A low camera angle and wide angle lens did the rest to help create a pretty decent image of my lovely bride.
Camera specs:  Canon 7D fitted with Sigma 8-16mm wide angle lens at 8mm, F16 @ 1/320 second, ISO 200.  Enjoy!  -David
Posted by David Ziser at 10:30 AM