We had a great time yesterday at my Photoshop World Wedding Shootout.  I tried a few new techniques that really worked out well.  Keep an eye on DPT this week – I’ll be featuring some of my favorite images from the shoot.

This morning Photoshop World kicked off with lots of fun and fanfare.  Remember a few weeks ago, I mentioned that I had flown down to Oldsmar, FL for a special project at NAPP World Headquarters.  I can now tell you what that "secret project" entailed.

The opening Keynote this year centered around the Project Runway show. I can now tell you that I had the honor of being part of the opening festivities.  Julieanne Kost played the Heidi Klum character, and yours truly played the Tim Gunn, eh - Tim Gamma role.  Scott, Matt, R.C., Corey, Brad, Dave, the entire NAPP team were the Photoshop designers, Jay Maisel, Fay Sirkis, Terry White were the judges.

It was a lot of fun to see how it all came together.  The team at PSW won't have it on-line till after the Fall PSW Las Vegas Convention in September.  I'll see if I can get a few snippets up for you to see before then.  It was all really entertaining, funny and full of Photoshop jokes.

I can’t tell you how cool is was to shoot wirelessly during my Wedding Shootout yesterday.  My Ace #1 technical assistant, Damien Tepe, spent a few hours the night before getting things up and running smoothly, with "smoothly" being the operative word when time is limited and you have a full class of 50+ attendees.

The class loved the fact that as I photographed my bride and groom, the images popped up effortlessly on the iPad 2 as we projected onto a light colored wall in the sanctuary of the church.  We used the HDMI adapter to connect the iPad 2 to my BenQ projector.  The BenQ has not only VGA and Composite inputs, it also has 2 HDMI inputs as well. 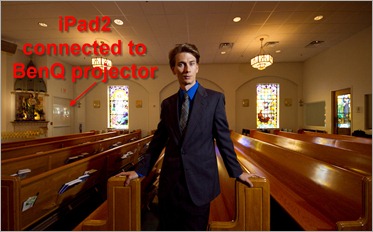 All worked like a charm.  Damien and I are next trying to see if we can have the Canon wireless transmitter broadcast to more that one device.  If it works like we hope it will, it should be about the coolest training tool ever!  I may have further news later this week on our experiments.

Our wireless set up was the talk of the show among the other instructors.  Rick Salmon stopped us this morning to ask more about what we were doing.  Damien fired up his iPad2 and I fired up the Canon and in a matter of 30 seconds made a quick exposure and  2 seconds later it popped up on Damien's iPad2.  Rick was impressed.  Even Terry White mentioned it in his blog post today - here is the link right here.

My good buddy and one of the Photoshop Guys, Dave Cross, has just announced the opening of his new training center in Tampa, Florida. Workshops will be taught by Dave Cross himself and guest instructors such as Scott Kelby, Mike Fulton, Jason Groupp, Matt Kloskowski, David Ziser, Joel Grimes and many more.

I’m honored to have been asked and can’t wait to get on the schedule.  Here is the link to all the info.

Terry Deglau and I have been friends for many, many years.  Terry was one of the top photographers working in the Pittsburgh, PA several years ago.  Early in his career he went to work for the Eastman Kodak company and rose to the top of their ranks.  Our paths crossed many times over those years.

Terry retired a several year ago and has so much information just waiting to be unleashed from his creative mind.  Terry and I have been talking frequently over the last two weeks.  In those conversations I've been encouraging Terry to begin a blog and share his stories, his experiences, and his photography.

I just received an email this morning pointing me to his first post entitled, "A Creative Mind Is a Moving Target".  It's a great read into a very creative mind.  I invite you to give it a read right here.  Thanks Terry, we all look forward to many more posts.

Don't Forget About Our Fusion Webcast Next Week

That's right, seats are filling up fast so please REGISTER HERE you won't want to miss out.

Below is a brief over view of the presentation;

Want to learn how to rise above the competition in a tough photography market?

DigitalProTalk.com will be hosting Ariane Fisher of Storymix Media in a free webinar on April 7th.

The photography business has been transformed over the last 20 years from medium format to DSLR; from large studios to independent photographers. Keep on top of the competition by offering products your customers want, with a workflow you can maintain.

Learn how to get started in producing, marketing and selling fusion photography. There are many fantastic workshops and books which teach the technical aspects of shooting (we'll provide links); with this workshop you can learn the business and storytelling aspects.

Take Advantage: For ongoing fusion education, check out our new blog at www.mixmybiz.com.

Thanks Ariane, we are looking forward to it.

Hey gang, that's it for me today. I'm doing a Presentation at the Peachpit booth at 4:00 p.m. today and then at 6:15 p.m. this evening I’m presenting my program, Lightroom For Wedding and Portrait Photographers.  If you're in the neighborhood, I hope you'll come up and say HI.