Good news, we've finally got the Digital WakeUp Call DVDs in and are assembling the pieces this week. All pre-orders should be shipped by the end of the week. Those of you that ordered so far are going to be thrilled when you open your package - more later this week.

Now on to today's Technique Tuesday.... 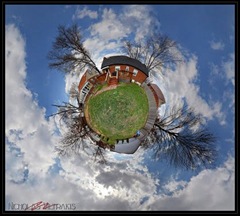 You know, this week's Technique Tuesday was the Technique Tuesday that almost never was.  I had seen some images Nicholas Viltrakis had posted to his blog a few weeks ago [link] and loved them - they were just so different.  I asked him to do a guest post about the technique he used to get his result and he happily obliged.

Well, between several mis-queues about fill formats to use - we finally got on the same page and Nicholas set off to create the video.  That was fine but in putting the tutorial together, I found that I had recorded the intro and exit at 1920x1080 on my Canon 7D.  As I was using Camtasia, my favorite tool for creating these types of videos, my computer did a BIG hiccup. The error was memory related and wouldn't allow me to make the final tutorial.  I then had to resize all the files to allow Camtasia to render the final video. Unfortunately, just a slight annoyance but gobs and gobs of time for this week’s tutorial.  Bu sure to tell Nicholas how much you enjoyed it.

After an afternoon of frustration, I finally got the bugs worked out so now I give you Nicholas' tutorial.

As I said, the images I saw on Nicholas' blog a few weeks ago really caught my eye.  These were panoramas but just not like the panoramas you've seen in the past. These are called stereographic panoramas, and boy do they look different.  I liken them to the flying forest world in the movie Avatar - way cool!

I asked Nicholas if he could show us how he created his unusual images and he gladly obliged. Hit the PLAY button below and enjoy the show.

Check out lots more stereographic panoramas right here.  They sure are fun to explore!

Hey gang, that's it for me today.  I'm firing up the new Canon iPF 8100 printer we installed a few weeks ago.  I want to run a few canvas tests through the printer.  I’ll share my insights and results later.

Have a great one everybody. I'll see ya' tomorrow for a very unusual PhotoFAV Wednesday.