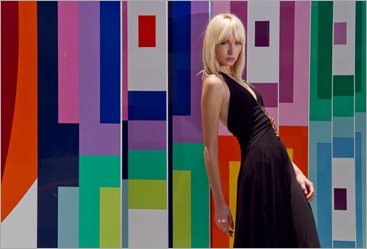 This image is actually the topic of discussion in our Technique Tuesday today.  I was in Tampa filming my upcoming training videos for Kelby Training – this image is from Day 3 of our shoot.  We were scheduled to shoot in downtown Tampa at the Curtis Hixon Waterfront Park [link], an urban park right in the middle of the city.

The sun was hot, I had no particular plans as to what I was going to photograph – I was hoping for a creative idea or two to pop into my mind.  Fortunately, I came up with a few more than just two ideas ;~)

We had just parked the car and as we exited the parking garage and started heading for the park, I stopped the video crew and suggested we begin with the urban artwork across the street.  Nobody quite knew what the plan was except me.  I had surveyed the area as they collected and gathered their gear from the car. I thought we had a great location to capture some exciting images of our model.

The secret was in how you perceived the art.  Of course you could view it from all directions but from two particular locations, the funky colored sculpture offered some very cool views which would serve as an exciting background for what I had in mind.  This is one of those views.

Lighting was from my Quantum flash camera right at full power.  Be sure to check out the video tutorial in the following post for the rest of the story [link].