"The Lady Of The House" 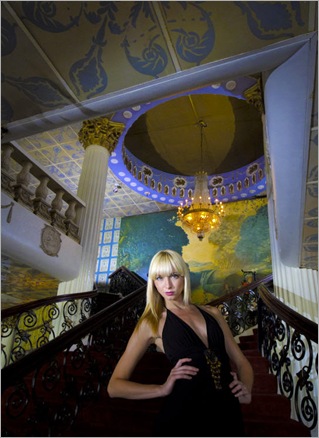 "The lady Of The House"
© David A. Ziser

I’m posting this image today for two reasons – one, I like the composition and color; and two, because of the less than simple lighting setup used to capture this image.

First off, look at the composition.  Even though the subject is nearly center frame in the image there is still “motion” within the image because of the long diagonal lines of the stairway moving through the background.  Even the subject’s pose compliments the overall composition.

Notice too that I have positioned the subject at nodal point #1 – bottom left - of the interior frame, the turquoise colored wall, giving a nice overall balance to the image.

I like the rich color tonalities within the image.  That could only have happened with the addition of two more speedlights illuminating the background.  I positioned one of my Canon 580 EXII flash with the wide angle diffuser in place on the second floor camera right and directed it to the wall behind the chandelier you see at the top of the stairs.

The other strobe, a very small inexpensive unit,  is coming in from camera left, again on the second floor.  I had it sitting on the floor directed to the wall area left of the chandelier. Adjusting the proper setting on each strobe gave me just the right amount of illumination on the background which added the rich turquoise, blue and gold colors to the scene.

The lighting on the subject was from my second Canon 580 EXII firing through my Zumbrella.  All strobes were triggered by my little CamerDoJo radio triggers.