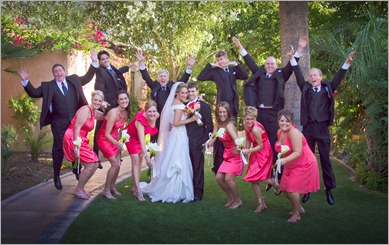 Here is another image from  the wedding I photographed a few weeks ago in Phoenix.  The bride and groom were looking for something a bit more spontaneous for their group photo.  Years ago, during the popularity of the Toyota commercial where everyone did the “Toyota jump”, I always made the jump part of the coverage – the clients loved it!

I decided to suggest the same thing for this group photograph.  The girls were a bit down on the idea of the jump because of their high heel shoes so we went to plan B and asked them to lunge forward with their flowers as the guys did all the jumping.  It was the bride and groom’s job just to give each other a big hug.

I gave the three count and the guys headed for the sky. After about 4 tries I had the shot I wanted and the clients loved it. You know, it’s always a fun addition to the album – maybe I need to start doing it again at my weddings ;~)