"Too Hot To Trot" 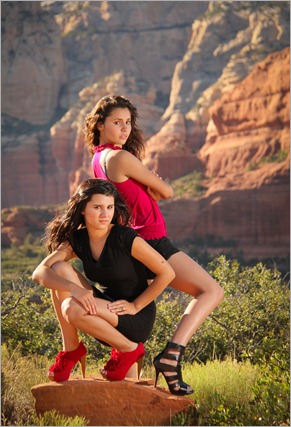 This is one of my favorite images of yesterday's shoot.  The location was perfect, The lighting was exciting, and our models were fun to work with.  Yasenia brought her sister Amairany along just to watch and before you know it, we've got Ronnie part of the shoot too.

Both girls were really beautiful and brought along some great outfits for yesterday's shoot - I love the shoes ;~) I positioned the girls on the small rock you see in the image, but because of the very little figures, I thought it would be fun to bring them together in such a way that would show compositional unity between the both of them.  at the same time, I wanted to feature their cool shoes too.

Once we got the pose set, we light them both with my off-camera strobe at full power.  I needed that much power since I was competing with the sun and using a rather low ISO.  I took up a camera position that allowed the lines of the rocks in the background to frame the girls up nicely and shot away.  I really like the finished result.  It's just plain fun, edgy and striking as well with both of them against the backdrop of Sedona.