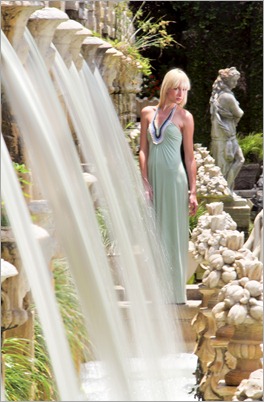 This image was made in the middle of the day at a venue reminiscent of the Greco-Roman gardens of ages past. There were plenty of places to capture some great photographs but I wanted to get some images with the flowing waters.  If I could pull it off, I’d get a great photograph.

In today’s Technique Tuesday, I’ll show you exactly how I did it without tripod but still using a very slow shutter speed.  Look at the image above.  Had I just relied on the naturally occurring light, the model would have been in the murky shadows making the image go nowhere.  I really needed to get light on her face to create some kind of dimension of her facial features.

That was accomplished with my Quantum flash at full power just outside of camera range camera right.  Actually, the flash head was in the image but a little Photoshop nudge took care of the problem. I love the lighting on my subject, Hope, and actually the entire scene.

Compositionally I think the image works quite well.  The water flows to the subject flanking her on the left with the roman statue doing the same on the right side of the image. Her position in the image at nodal pint #3 finishes up the composition nicely.