"The Wings Of Love" 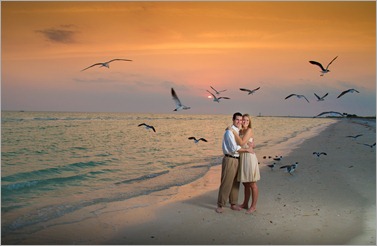 I love this photograph!  We were on the beach hoping for a good sunset for our engaged portrait session last week.  Well, as you can see, the sunset kind of fizzled out.  I was able to tweak the sky in Lightroom with the Vibrancy slider and also adding a slight orange gradient to the sky.  I think it was a pretty good save.

Of course you’re wondering about the bird's, right?  Where did they come from, how did we get them swirling around the Brittney and Colby?  It’s a simple trick I learned from legendary bridal pictorialist, Rocky Gunn in 1982 – just start throwing breadcrumbs into the air and the seagulls will appear almost magically out of thin air.  It’s really true, they will.

Meredith, one of our video crew mentioned that she had packed a few sandwiches for the couple and crew – none for the photographer, BTW ;~)  Anyway, I told her we needed to sacrifice a sandwich for the shot. She grabbed a slice of bread from one of the sandwiches and began tossing the crumbs into the air and you guessed it, the seagulls appeared.

The trick is to capture the right moment when the seagulls are in a good position compositionally for the shot.  This image was our best effort.  We went through a few slices of bread but we did capture a great image.

I wanted to continue the bread tossing for a backlit photograph but had a mutiny on my hands when I asked for the rest of the sandwiches. We got close with a few remaining crumbs but not the dramatic image I wanted.

Lighting was from camera right.  My Quantum flash was on full power threw my Zumbrella which BTW, was a slight casualty due to some seagull debris but everything cleaned up OK ;~)

It’s always about coming back with the image. The sunset was a bust so I needed to come up with plan B, the seagulls proved to be a great save! Anyway, it was a great exercise in dramatic and cool beach photography. I can’t wait for you to see the training video.

Hey gang, that’s going to it for me today.  Our rehearsal dinner shoot went late last night and I’ve got to get the gear ready for today’s wedding later this afternoon.

How about checking back next Monday.  I’ll be hailing from Sedona, Arizona for the start of my Sedona Experience class.