Technique Tuesday: You Light Up My Life: Alternate Ways To Light Outdoors

I hope things are looking good for you in your part of the world today. We had lots of little things to do here at the studio today hence the later than usual post. So let's get moving with today's Technique Tuesday episode.  Here we go...

You Light Up My Life: Alternate Ways To Light Outdoors

Today I've got a pretty cool Technique Tuesday for you. It’s practically a Kelby Training video – yep, it goes a little long, but good stuff - I promise!

It's actually the result of an experience I had during my Digital Master Class. We were shooting in downtown Cincinnati, Ohio and one of the groups, lead by my coach, Craig Weiglein, had found a really cool alley way for doing "urban" wedding images.  Craig is a great shooter in this part of the world - you can check out his website right here - and shoots lots of high school seniors and concert events here in the city. 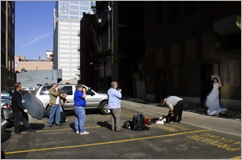 Anyway, I saw he had his group working in this urban landscape and was wondering what was going on.  As I got closer, I saw he was holding a Westcott 36” reflector, grabbing some sun, and bouncing it back into the scene. His group was getting some pretty nice results.

Here's where the idea popped into my head about how to use the reflector as a key light for some of my wedding shots.  Craig was bouncing the light back on our models which gave a kind of "fashion" look to the shots.  But you know me, I'm a "loop light" kind of a guy. I wanted to see more of a direction of light on the shot I had in mind.

Don't get me wrong here, the "alley group" was getting some cool shots - I'll show you some in today's video, but I was looking for a more dimensional lighting for my images.

Here is the challenge when shooting outside. To get that direction of light on your subject with an off-camera flash, you are limited by how bright the location is.  What I mean is, in bright light, when using flash, you are limited to the highest "sync speed" of your camera.  That's usually around 1/250 second.  That means your aperture needs to be much smaller in that bright light, which means you need more power from the strobe to light the shot at the smaller aperture. Sure, you can "cheat the sync" as I've shown many times here at DPT [link], but that only gains you about 2/3's higher shutter speed and slightly larger aperture. 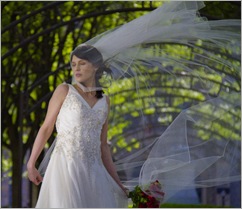 But what if I want to use a much wider aperture to really throw the  background out of focus so I can separate the subject from the background in a "bright light" situation?  The shutter speed would need to be very high because of the larger aperture, much higher than the native sync speed of the camera.  That would mean that the camera wouldn’t be able to sync with any attached flash. There is really only one practical way to reach the large aperture exposure solution.

That solution is with a reflector bouncing the sun's rays back into the scene from a "key light" position.  What do I mean by that? I mean I want the key light to be coming in from a direction that preserves my precious "loop lighting" pattern [link] on my subject.

With the light bouncing off the reflector and illuminating the subject from the same direction I need for my desired loop light, I can easily shoot at a much wider aperture since the shutter speed is not dependent on any kind of flash sync limitation and the shutter speed can fall where ever it needs to be for the best exposure of the shot.

OK, have I confused you enough so far?  Why not hit the PLAY button below. The entire process will come into focus, no pun intended, and you will have a great technique for your outdoor, bright sunny day shots.

Hey gang, that's it for me today. We got lots of things happening around here today.  I'm wrapping my presentation for my B&H program I'm giving on Sunday up in NYC and working on our next newsletter too. These poor little two figures of mine are being worn to the bone with all this typing ;~)

How about I plan to see everyone tomorrow for another edition of PhotoFav Wednesday, where I discuss, "Why You Need An iPad In  Your Life".