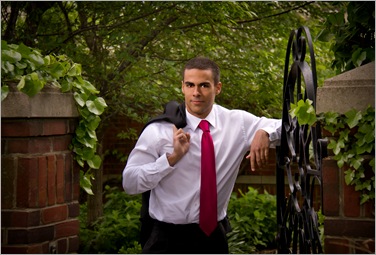 Occasionally when shooting a wedding the church will have a nearby garden that fits the bill for some great photographs.  That was the case here. I wanted to get just a casual shot of the groom.  Sometimes asking him to take off the jacket and just hold it over his shoulder works just fine.  Leaning him on the black wrought iron gate added to the masculine feel I wanted to convey in this image too. Now the challenge was to separate him from the background which was easily done with a long lens and wider aperture. I also wanted to kick a little light into him to give me my flattering loop lighting pattern on his face. Fortunately the area I chose for the portrait was in full shadow which let me use a wider aperture with a shutter speed that worked for my off camera flash.  Notice too, how I composed the shot with the groom in the middle flanked by the gate to his right and the wall to his left. The tree in the background finishes the framing across the top of the image. Camera specs: Canon 7D fitted with 18-200mm IS lens at 70mm, F 5.6 @ 1/250 second, ISO 200.  Enjoy!  -David