Super Bowl Monday: In The Middle Of The Action

I had planned to do a regular Quick Hit Monday post today, but that all changed last evening when the New Orleans Saints won the Super Bowl! 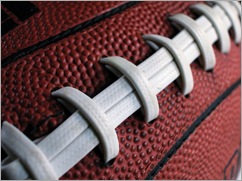 Hey, the most exciting news happening in the country today is the  Saints win. Add to that that the entire city of New Orleans is in the middle of it's 2 week Carnival celebration, too.  Most of us are very familiar with Mardi Gras and Fat Tuesday and all the wild celebrations going on. But what you may not know is that there are more that 50 parades that take place in the Big Easy beginning about 2 weeks before Fat Tuesday.

That adds up to one heck of a lot of partying going on in the city.  Add to that the Saints wining the Super Bowl and you have a "perfect storm" a really positive "perfect storm" for all the residents of the city devastated by Hurricane Katrina 4 1/2 years ago.

The city's energy and life is back and the whole world can see it for themselves this weekend. It is a thrill, perhaps a once in a life-time thrill, to be part of it all. We hear over and over, "They might be playing the Super Bowl in Miami, but the party is in New Orleans!"  That has definitely true!

So having said that, I'm putting a new twist on today's post.  So far I've taken over 1200 photographs so I thought I would choose a few and give you a look into the back story of what goes on in a photographers mind when he's covering the action in a different sort of way.  I hope you enjoy the post.

King and Queen of the Ball 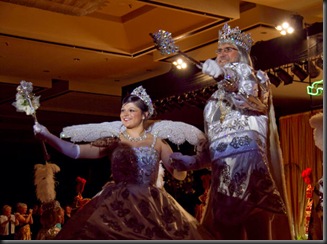 This image was`made as the King and Queen of the Ball presented themselves to all the attendees.  The goal is to keep the couple in focus while still getting their best expressions in the rapidly changing light of a very bright spotlight.

I set the camera to "automatic pilot" in these kinds of situations.  First, I set the ISO on "auto" ISO - I wanted the camera to make the best choice for the rapidly changing lighting conditions.

In order to guarantee a good exposure in the contrasting lighting conditions, I chose to use "spot metering" metering off the couple to be sure I didn't miss the exposure. I was also set to AWB since the spotlight was closer to daylight than tungsten.

I sat in the floor near the action and captured some great images.

Children Of The Court 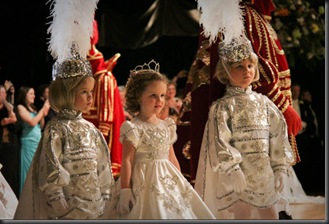 The kids were so cute.  I wanted to capture the fleeting expressions, but also wanted to still show all the pomp and circumstance swirling around them.  Camera settings shifted wildly from the settings above.  This shot was taken at F5.6 @ 1/160 second, 110mm 918-200mm IS lens), ISO 3200. With my camera on "auto pilot"  I got this nice shot the these 3 very cute kids in all their regalia. 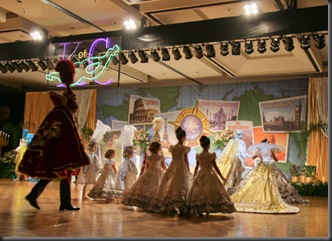 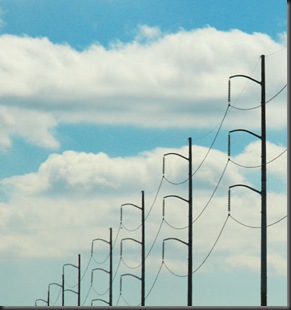 This image was made as we were driving across town to visit the Krewe of Carrollton "den of floats".  I tried my best to just isolate the power lines against the sky.  The cissoid line of the hanging cables and against their towers made a nice urban composition.  Not bad for shooting out a car window at 50 mph - LaDawn and I call these kinds of shots "drive by shooting" ;~) 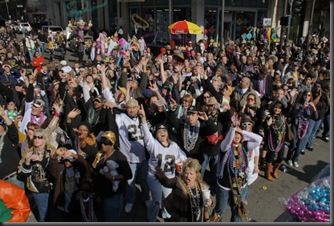 This is a quick shot from the float.  It is mayhem for 3 solid hours.  Each float tosses about $10,000 worth of beads, stuffed animals, and doubloons into the crowds.  Do the quick math - we had 21 floats in our parade.  Amazing!!!! 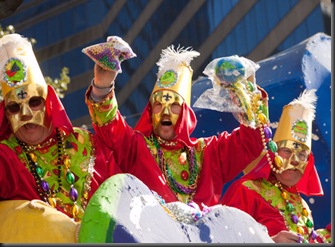 This image was made by LaDawn from street level.  That's my buddy Ralph on the left, his son Ryan in the middle and you guessed it, that's me on the right.  We had great weather for the parade, great crowds, and as they say say here in New Orleans - A Great Ride!!!

After our parade it was a quick change of clothing. We then enjoyed a fun Super Bowl Party with friends - old and new. Yes, we were crazy enough to head on down to the quarter after the game.  It was crazy - shoulder to shoulder fans "screaming, yelling, high-fiving, and yes - drinking an adult beverage or two or three or four…. The crowd was packed so tight, it took 30 minutes to go just a block or two.  In spite of the crowd everyone was in great spirits - obviously. Hey, if you were there, you had to hit the "Quarter." 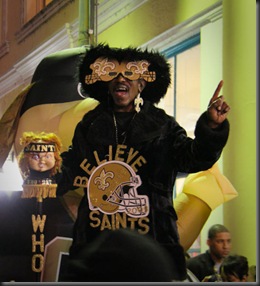 Light was not very bright.  I shot everything at ISO 3200.  I was still shooting at very slow shutter speeds - 1/13 second for this shot.  Image stabilization is my friend. Remember, takes lots of shots to capture one or two sharp ones. We're going back tonight and tomorrow and I'm going to goose the ISO to ISO 6400.  I'll keep you posted.

Hey gang, that's it for today's post.  You know, even when I'm not hired for the job, when I've get that camera in my hands, I am ready to go.  Call it the adrenaline, the excitement, the joy of the shoot, a career as an event (wedding/bar & bat mitzvahs) photographer - I love it!!

See ya' tomorrow.  I've got a Technique Tuesday planned to post.  But, who knows what going to happen today in New Orleans, the center of the universe for this weekend   ;~)

Have a great one,  -David