We finally got dug out yesterday about 3:00 p.m. so things are pretty much back to normal here in the frigid Midwest. 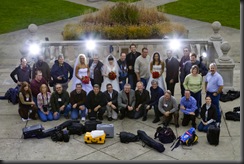 Hey gang, I almost forgot to mention this but my Digital Master Class [link] coming up April 26-30, 2010 is almost full.  We never really announced it but people just started signing up. When I last checked yesterday, I saw we only had about 3 spaces left -yikes! That's why I thought I should get the word out today.  Give my studio manager, Jennifer, a call at 800.292.2994 right away if you want her to reserve a seat for you.

For the last few days I've been trying to get the DPT posts to hit my Facebook page and Twitter but I'm not having the best of luck.

For Twitter, I'm using TwitterFeed.com.  It worked the first time and now seems to be dead - nothing has posted since last Friday. The feeds all look OK so I'm stumped.  Facebook is normally supposed to update in about three hours but took more that 24 hours for the last post to hit.  Yesterday's post hasn't made it yet.  Don't you love all this digital stuff ;~)

I'll save the "bug chase" for another day - on with today's post.

Please scroll to end of the article for my update. 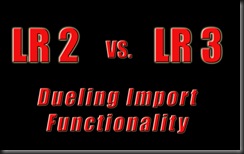 OK, I'm writing today's post with fear and trepidation that the Photoshop police are going to be knocking on my door after I post this.  But, here goes anyway.

A few months ago, I like so many others, downloaded the public Beta of Lightroom 3. Hey, I loved what I saw, but I kept stumbling over the new import function.  Here is my fist blog post about it right here where I posted that it took me 10 minutes to import 150 images!

OK, granted it’s a Beta so I decided to hang in there. Besides, I loved so many of the new features, I wanted to stay on board. I continued to wrestle with the new import function. It continued to be a hair pulling frustrating experience.  You can read my follow up post to the Lightroom 3 Beta import function right here - scroll down till you find it.

It's been 3 1/2 month's since I've re-visited the LR3 beta import issue.  I was having a conversation with one of the internal LR3 beta testers and casually asked if Adobe had done anything to FIX the import issue. He reported, that to his best knowledge, the import feature would remain the same. I can't tell you who I was speaking with otherwise they would have to "kill" me - you know, NDA's and all ;~)

Anyway, all joking aside, I decided to give the issue a very close look yesterday and see if I could quantify the issue, that is actually put a stop watch on the import process - maybe I was missing something.

No, unfortunately, I was not missing anything.  I wanted to import one image off a flash card - it was yesterday's "snow image".  I popped the card into my card reader, opened up LR2.6 and had the image in Lightroom 2.6 in 15 seconds.  I then fired up LR3b and started the stop watch. 7 minutes later I had the image imported into LR3b. The entire process took 2800% longer than with LR2.6!!!  I tried it a second time.  Since the thumbnails were already in place, it only took 3 1/2 minutes the second time around - still unusable and too long a time.

For my next test, I wanted to import a few images from a recent wedding.  I pointed LR3b to a directory where several thousand images resided. In this particular file I shot about 4000 images covering the event. It took 10 minutes to populate the thumbnails this time - totally unacceptable in my workflow!!!

Check out the video below to see what I'm talking about - it's a short one but surely points to the MAJOR problem with LR3b's import functionality.

Why hasn't this been reported by anyone else?  I'm in LR2 everyday importing the occasional image for a project, blog post, etc. LR2 works like a charm. So what's the problem?  I believe the problem lies in the fact that I'm a professional photographer with several terabytes and over 1,000,000 images on my hard drives at any one time.

Lightroom 3b wants to look at every one of those files before it will let me get to the import process. I just want to quickly drill down to the few files I want to import and be done with it.  LR2 does this perfectly and it really bothers me that this speedy import functionality is going away with the new version - or so it seems.

For me, that means that LR3 is not a working solution for me at this time if things - the import function - stays the way they have it programmed in the current  beta.  I certainly hope Adobe takes a hard look at this before releasing the final version and gives those of us (professional wedding photographers) with lots of data on our computers an option of returning to the legacy LR2.6 import procedure.

I know I'm fired up about this thing.  I sure wish others would take a hard look at this issue and bring it closer to Adobe's attention.  I'm a huge Adobe Lightroom fan and am not against "change" but this change is for the worst.  Until the import speed returns, I'm sitting out this next upgrade.

UPDATE To Post: Hey everybody, thanks for all the comments. I’m glad I’m not the only one having the problems.  You know, the original idea of this post was to raise awareness of the issue in hopes that adobe doesn’t “go to press” with the new import function “etched in stone.”

We can get all “gee whizzed” with all the great newest, latest greatest features of LR3b without even looking at how SOME of the changes can and will seriously affect our workflow.  Hey, aren’t those the kind of things a public beta is supposed to uncover?

I love lots of features on the new version, especially the new noise reduction features.  But do I love them enough to jeopardize costly increased production costs for my studio, maybe not.

The main problem lies in the fact that the more data (hard drives) you have hanging off your computer, the slower the import. Lightroom 3b wants to look at ALL that data before it lets you get to the import function.

If you import frequently into many catalogues, as I do, the new import function becomes a PAINFULLY time consuming process and simply no longer works for my workflow.

As far as timing my imports, I started the clock the moment I hit the import button and stopped the clock when all the images had populated in LR3b.  The video shows this very clearly. If you want to do your own testing, drop your results into the comment section below – just be sure to “start the clock”  as soon as you hit the “Import” button and list the amount of data on you local computer.

Sure, the argument can be made for newer, faster computers, etc. but hey, give me a break – LR2’s import is FAR superior to LR3b!  I still stand behind the import speed of LR2.  My question is, “Why neuter the speedy legacy process in a new version?”

I liked the very creative work around offered by Shambrick who suggested, “If you set up auto import, you can copy your single image to the specified watch folder then it should auto import quickly.” – Good idea.

Hey gang, that's it for me today. The air is brisk, the sun is trying to peak out from the clouds and it looks like a great day in the neighborhood.  See ya' tomorrow for a very cool Business day Thursday.  Adios,  David