"Lounging On The Lawn" 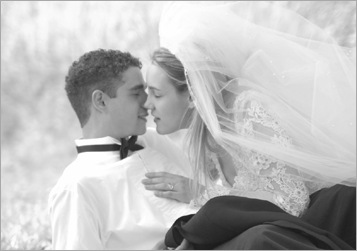 "Lounging On The Lawn"
©David A. Ziser

I captured this image of this young couple a few years ago at a class I was teaching.  The goal of the shot was to capture them as relaxed and as romantic as possible.  Yes, the were a "couple so it was easy to pull it off. I positioned them In a shady area of the lawn.  The sun was illuminating the background which gave me a wonderful high key (light background) effect. Too many photogs, when photographing couples kissing, have them lip-locked" for the shot.  The best way to photograph a couple kissing is to make the shot at that split second before their lips touch.  That moment captures the emotion of the excited anticipation of the kiss, not just the "action" of the shot itself. "Anticipation" always trumps "Action" in a kissing photograph. Camera specs: Nikon D1x fitted with 80-200 non VR lens at 105mm, F 2.8 @ 1/1250 second, ISO 400.  Enjoy!  -David