”Dancing In The Clouds” 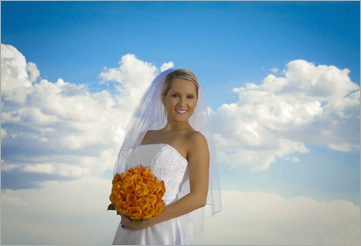 ”Dancing In The Clouds”
©David A. Ziser

This is just an easy portrait I made of this young lady  in the middle of the day under the worst of conditions. – very bright and sunny, urban clutter everywhere, and VERY hot and humid.

It was a city photographic session so I was challenged to separate my subject with a part of the sky that would allow enough “space” to supply an adequate background for this image.  Low camera angles and long lenses can make that job quite a bit easier.  I was sitting on the pavement with a long lens attached to my camera to get the framing I wanted.

The next challenge was to keep the bride out of the direct  sun – which is never flattering light.  There was a shadow being cast by a nearby building in which I could place my subject within. Now a lot of photographers would have just shot away and been satisfied with the flat non-dimensional lighting on her face.

The other problem they would have encountered would have been getting the correct exposure on the bride standing in the shadows thereby rendering a detail-less, overexposed sky behind her – again, not a very interesting image.

Adding the off-camera flash solves the problem.  It brings detail and dimension to the bride’s gown and facial features as it is brought in camera right just enough to create the loop lighting pattern on the subject’s face.  Now by balancing the flash exposure with the sky behind the bride, I can easily bring in the nice textures of the clouds in the sky behind the bride.

Finessing the image in Lightroom 3 finished the result.  All in all, a nice basic image of the bride captured in a not so basic way.