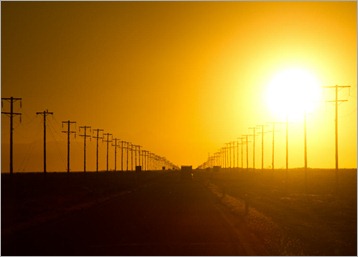 I made this image in November as we headed out on the second day down the Baja Peninsula on our way to Cabo San Lucas.  We wanted to get an early start and were under way slightly before the sun came up.

All seemed fine for the first 45 minutes but as the sun grew higher in the sky, it was right before our eyes burning our retinas to a crisp.  It really was quite uncomfortable for about an hour driving into that burning ball of light.

Visually, it was quite cool to see through the camera's viewfinder.  I was shooting with the Canon 7D with the lens racked out.  The benefit of the long lens was the severe compression of the scene making the sun appear even larger.

The nearly empty country road, the numerous telephone lines, and that giant ball of light created an image that easily supports it's name, "Burning Daylight".