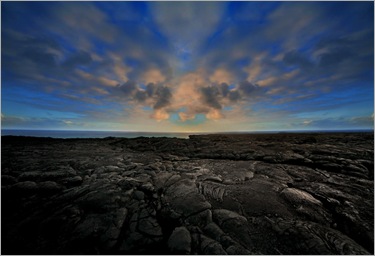 This surreal image is from a trip we made to the Big Island of Hawaii a few years ago.  I still find this a very intriguing image in how I put it together. It began as a straight forward photograph from our hike across the lava fields – quite and adventure in itself.

The park rangers advise leaving near dusk so the you arrive at the live lava flows, yes, live, red hot lava flows about 90 minutes later well after sunset.  That way it’s really easy to see the lava flowing under your feet through the cracks and crevices on the lava field.

It was quite the experience – both of us ended up with melted soles on our shoes.  The real challenge was making it back in the blackness of the moonless night over the 2-6 feet high lava flows.  It was like being on a Stair Master for 2 hours on the way back – we were wiped out!

Anyway, back to this image.  It was made on the way out to the lava fields.  We had perfect weather and just the right amount of clouds in the sky to make for a great shot. The original photograph looked like an ordinary landscape image – I thought I could make it more that that.

Lightroom was not out yet so I did all the image manipulation in Photoshop. The process was quite simple.  I highlighted the center part of the lava to give a focal point to the center of the image.

I wanted to carry that out in the sky too.  It was easy to do.  I selected half of the sky, none of the lava, from the center to the left of the image. Then I just made a mirror image of that selection and placed it in the right half of the image – now I had my cool sky.  I worked the sky into the lava part of the image and presto, I had the image I was looking for.  I think it is quite hypnotizing the longer you view it.  Hope you like it.