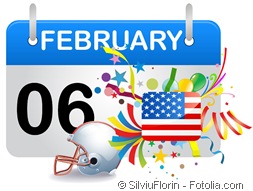 I hope your Super Bowl team won yesterday and if they didn't I hope your buddies weren't too rough on you after the game.  You know, it doesn't matter if your a football fan or not, sometimes it's just fun to get together with family and friends.

I've never been a big football fan, but LaDawn has been her entire life - here Dad was a high school football coach and her kids were lettering athletes in high school and college.  She grew up on the game. She is nearly 100% percent right on any close call - when the refs go under the hood to review a close play, I swear, they're calling LaDawn to ask how she saw it - she is ALWAYS right!  Anyway, a good time was had by a few friends at the Ziser Super Bowl Party!

OK, so the packages begin arriving from Amazon around Wednesday and my wife, LaDawn begins to wonder, "What's up?". Well, for our Super Bowl party we hosted yesterday, I wanted to have it in the larger studio portion of our home.  The problem was that there was never a TV or cable in that room.  I had always had a data projector for client viewing of their images which I covered in a post a few years ago giving our DPT readers a tour of my studio [link].

What I needed was a digital TV tuner that I could hook up to my data projector.  You see where this is going - super BIG deal, not really, Super Bowl BIG viewing of the game, a REALLY BIG deal.  My Kworld External Digital TV Tuner Box [link] arrived along with Terk HDTVa Indoor Amplified High-Definition Antenna [link] I needed to pick up the FREE digital broadcasts from the local TV stations. 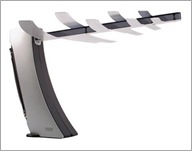 We hooked both the tuner and antenna up as shown in the manuals and in about 30 minutes, we scanned for the local stations - the KWorld tuner box/Turk combo came up with 42 stations. And yes, I was amazed how much FREE content was available in the Greater Cincinnati viewing area.

Next we hooked things up to the old Dell data projector and in short order were watching TV in big, bold living color on the 10 foot drop down screen on which I show my client their images.

The problem that now I had three devices, a TV tuner, a Internet ready DVD player, and my studio computer all wanting to use that projector at one time or another.  It was a real inconvenience to keep swapping cables every time I wanted to use a different device.  There had to be a better choice.

The Dell XGA data projector I had been using for over four years had done a decent job.  The 1024x768 resolution made the images look pretty sharp on the screen and the projector was plenty bright 4 years ago - projector bulbs don't burn out, they slowly fade away.  Still with the 1920x1080 resolution sources I was feeding into the Dell projector, the image quality was severely compromised.

I decided to do something about it later that day.  After some quick research on the web, the very reasonably priced Benq W1000+ presented itself as an option - under a $1,000 and 2000 lumens of 1920x1080 hi-def wonderfulness [link].  I ordered one from Amazon and was due to receive it on Friday.

Not only was it a hi-res projector, but it also had two HDMI inputs - that would take care of the digital TV tuner and the Blu-Ray DVD player.  It also had a separate VGA input for my studio computer and several other inputs as well.

It arrived mid afternoon on Friday and I had it hooked up in about an hour to all three devices.  The image was gorgeous!!!  What a difference the 1920x1080 resolution makes!  My client images looked sparkling projected on  the 10 foot screen out of Lightroom.  Casino Royale was amazing in it's Blu-Ray glory, and digital TV was equally amazing to view.  Now with the simple press of a button on the controller, I was good to go to present images to my clients, watch a DVD or Netflix on the DVD player, and even tune in the Super Bowl yesterday. Our party guests had the best time relaxing in the comfort of my studio watching the Super Bowl activities 10 feet large!!  Life is SOOOOO good.

During my weekend surf sessions, I found some super cool time laspe videos - that are amazing.  The first is entitled, "The PaOule Blue Dot" by Michael Marantz right here is an inspiring time lapse film with the late Carl Sagan reading that poem during the visually stimulating imagery.

The second is even more amazing!  It by Tom Lowes and it's entitled "Rapture".  I found it over at Vincent LaForet's blog and it is an astounding piece of work.  Tom has apparently been working on the "Rapture Project” for nearly a year and this is just a peak of what he is putting together.  Hit the PLAY button below and prepare to be blown away!

Like Those Top 10 Lists So Many Folks Put Together At The End Of The Year?

I also provide a glimpse at my Top 10 selections.  Fellow blogging buddy, Jim Goldstein, of JMG Galleries has put together a fine collection of 10 of the Top 10 photo blog listing for 2010.  His list includes things like the top ten Hubble space images, the top 100 sports images, top ten Vimeo videos, etc.  Here is the link right here.  A very worth while collection for your Monday morning dose of inspiration.

Also, Photoshelter.com [link] has a great set of top ten lists available. Their lists cover everything from Photo Marketing, Photo Gear, Photo Technique, Photo Inspiration, and more.  It's another worthwhile link to bookmark.  Here is that link right here.

Hey gang, that's it for me today.  Have a great Monday today and a fine beginning to this week.  I hope I got you off to a good start today. I'll plan to see you for another Technique Tuesday tomorrow.

See you then,  David