You’ve Got To Come Back With The Shot: Speckled Lighting On The Gowns & New Class Announced

Again it’s another super busy day.  We are putting finishing touches on our upcoming Napa Experience Private Workshop – only 3 seats available - and as were working on that a few more teaching opportunities popped up on the West Coast.  We are now in the process of putting together a short three city tour in California.  We are still working out the details so I’ll give you an update in a few days.

I’ve neglected to mention David Cross Workshops has just announced my class on his website too. This is a very limited class so check it out – it will be a fun day including an on-location shoot in Oldsmar, Florida. You can get all the info right here.

OK, time to get on with today’s post.  Here we go.

Another challenging lighting situation is when we find ourselves working in a park and there isn't much shade available in which to pose the bride and groom, families, or wedding party. The background may be interesting, but the lighting is all wrong. I always have to laugh a little when I think of how many photographers believe that their flashes with just blast away those “speckles”. It may reduce the contrast from lights to darks but the added flash will NEVER make the “speckles” go away. The fact of the matter is that no amount of light is going to make the “speckles” go away.

I’ve mentioned many times that whenever I'm outdoors shooting I always backlight the subjects. That means I’ll never see those nasty “speckles”. They’re on the back of the subjects so thus I’ve eliminated the “speckle” problem. Take a look at the next image – Figure 1. 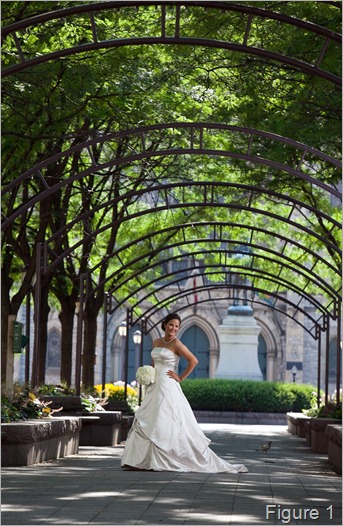 I was working in Downtown Cincinnati, Ohio in one of the small urban parks. The light was filtering through the trees as you can see with the lighting “speckles” on the ground everywhere but not on my bride.

In backlighting the subjects I create a nice accent light on the bride in the photographs leaving her face in soft shadows. Now some photographers may be happy with the flat lighting on the subject’s faces, but not me. I need to add dimensional lighting to the subjects. This is easily done with my off-camera flash. I use a Quantum T5D; it’s a 150 watt/second flash which gives me adequate power when working outdoors.

When using off-camera flash outdoors, it becomes a challenge because you're limited to the fastest sync speed of your camera. The fastest sync speed for most of our digital SLR cameras hovers around 1/250th of a second. So, if we are locked into 1/250 second that means the aperture may be quite small in the brighter outdoor light and that will limit the flash to subject distance of our off-camera flash. We may need to find a more shadowed area in which to work so we can use a larger aperture.

When shooting outdoors I first reduce the ISO to a minimum of ISO 200. Next I'll consider “cheating the sync”. “Cheating the sync” means using the shutter speed faster than the native sync speed of your camera. When shooting the Canon 70, I can easily get by with the flash sync speed of 1/320 of a second. You may be asking how I'm able to achieve that. The easy answer is that the shutter curtains only reveal the top two thirds of the CMOS sensor at 1/320th of a second. That means that the bottom third will not receive any flash illumination. That's not a bad thing because it gives me a built-in vignette on my photographs which can be quite pleasing. You still need to remember to not place an important part of the image, the subjects face for example, in the non-flash illuminated area.

OK, follow along with me. My ISO is set to 200. My faster shutter speed is set at 1/320 of a second. My aperture generally will fall in at about F8.0. At F8.0 I still have a reasonable working distance of the flash to my subjects and can still get enough light on them to create the dimensional look that I desire.

My goal is to use my off-camera flash to create what is called a loop lighting pattern on the subjects’ faces. An easier way to tell you how to set up your off-camera flash to obtain the loop lighting pattern is this; Just have your assistant rotate around the subject(s) until they can no longer see the camera side of the nose – the side of the nose I see, but can still see plenty of the “camera side of the cheek”. That will create highlights next the shadows and give a dimensional look in your photographs. See Figure 2. 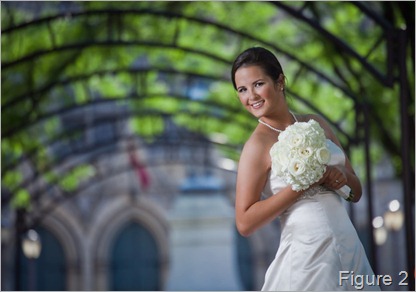 DAZNOTE: The key thing for your assistant to understand when photographing groups is that as he/she rotates around the subjects they must be sure NOT to throw nasty shadows of one person onto another person. Ideally, your groups must be posed no more than two people deep and your assistant needs to be able to see 100% of all the faces, not partial views, but full views. That being said you should have no problem creating a nice dimensional look on your group when shooting outdoors.

Hey gang, that’s it for me today. I’ve got to jump a webcast with one of our industry friends.  We’re going to be hearing about some brand new cool software introductions – it should be fun.  As soon and I can tell you about it, you’ll hear it first right here at DigitalProTalk.

Plan to join me tomorrow for another business building episode of Business Day Thursday: Innovate Or Die!

I hope to see you then,  David