You Still Have To Come Back With The Shot! - Super Dim Receptions 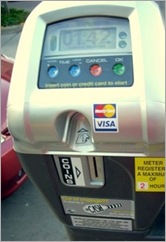 It’s official, Cincinnati has moved fully into the 21th century.  I navigated my car into the parking space, checked the change in my pocket for the meter but then quickly discovered I didn’t need change – THE PARKING METER TOOK CREDIT CARDS!!!   Yep, that’s the meter.

To busy again today – I’ve been up and at the computer since 5 a.m. had a vendor meeting with a client whose daughter’s Bat Mitzvah were photographing in three weeks, and picked up my brand new computer. And, I’m looking at the clock and it’s 3:45 p.m. so here we go.

Today I’m continuing my series I began several weeks ago entitled, “You Still Have To Come Back With The Shot!” Last week we talked about super dim wedding venues – this week it’s about really dark reception venues.  Here we go…

I want to talk about one more extremely challenging lighting condition. We recently arrived at the reception venue (we’re shooting in the same place in three weeks) and walked into the main ballroom and we were all blown away by the extraordinary decor - See Figure 1 below. The theme was Willy Wonka and the reception was beautifully and brilliantly colorful. But, it was going to be the table centerpieces that were going to be an issue for some of the photography. 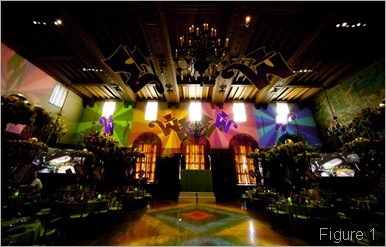 Even though there was colorful lighting throughout the room, most of that light was blocked from those guests sitting tableside - See Figure 2 below. You're asking, "What difference does that make - just use your flash." The problem for me was that I like to take several photographs at the receptions, whether it be weddings or Bar/Bat Mitzvahs, capturing the faces and expressions of the guests with just the available light. 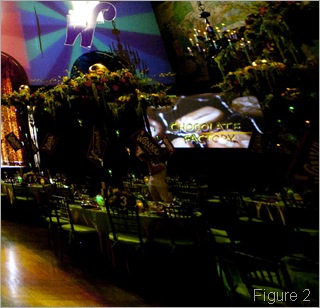 Here is my challenge. The DJ had just begun to play a slideshow presentation showing images of the guest of honor growing up, as a baby, his toddler years, being with his sisters, parents and grandparents…. and so forth. All the guests’ eyes were fixed to the large projection screen.

As I said earlier, I love to capture the guests’ sometimes joyful, sometimes reflective expressions as they watch the presentation. Granted, light is quite low during these slide shows, but it was even more challenging this particular evening with the very large centerpieces blocking the over-head light.

Kicking In The HIGH ISO Afterburners

My lens of choice for these images is my Canon 70-200mm F2.8 IS lens. I was shooting my Canon 5D Mark II and knew it was good for ISO 6400 shots. This situation called for me to juice that ISO all the way up to ISO 12,800 if I was going to capture any emotional expressions of family and friends. I cranked it up to ISO 12,800 and began shooting away.

I understood the possibility I most likely would be introducing noise into my photographs. I also knew that none of these images were going to be wall portraits; at best maybe a 5x7, 8x10 or 10x10 sized print in their albums. Considering that, I felt comfortable in the fact that I could use my Nik noise reduction software to reduce/remove the noise and still achieve an acceptable/salable photograph for my clients.

As I was photographing expressions of the audience watching the show, the young boy's mom spotted me with the camera and quickly had her son and his friend look towards the camera beckoning me to take their photograph. There was simply no time to grab a flash – I had to quickly take the photograph of them or miss the moment. I knew I was going to have to pull it off not with the camera but with the computer.

I was shooting at some fairly slow shutter speeds hand-held and may encounter a little camera shake so I took several exposures to cover my bases. As it turned out, I captured a great image of all three of them. Processing it thru Lightroom 3, I was easily able to make the necessary exposure/color balance adjustments. A little finishing it up in NIK’s DFINE 2.0 noise reducing software and I had a great image of all three people smiling back at the camera. Take a look at the next image – Figure 3.  It’s a winner! 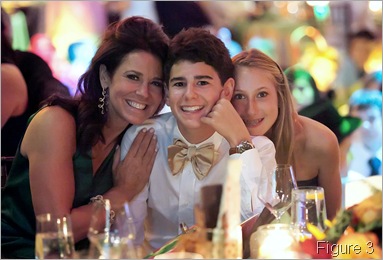 This solution was simply not only the result of understanding light but a combination of lighting the scene, exposing the scene, and knowing what you want to do with the software tools available.

Hey gang, that’s it for me today.  I’m whipped and it’s still early.