You’ve Got To Come Back With The Shot: Really Low Light Churches

It’s busy here again at DigitalProTalk world headquarters.  I just put the finishing touches on our Digital Design Webcast email that’s going out today.  That will probably fill the seats, so beat the rush and get yours reserved today [link]. 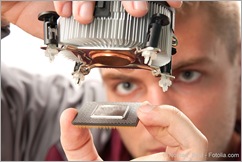 Another thing keeping us busy around here at the studio is a complete computer overhaul with brand new custom built computers.  We’re speeding things up with 250 gig boot flash drives, faster video cards, and bigger hard drives – don’t you love digital ;~)  Hopefully we should be up to speed by the end of next week.

That’s what happening on the home front – let’s get to our post today.  Hope you like it. 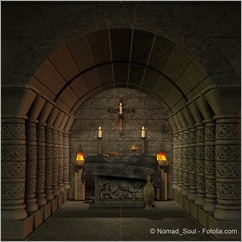 Okay, so what happens when you walk into a church and it’s so dark no amount of “juicing” the ISO is going to save you? Thankfully I get to say that I haven’t walked into churches that dark in recent years.  Most churches have adequate lighting to at least get the photograph. Thankfully we’re not shooting in the Middle Ages when the only illumination would have been candles only ;~)

It’s also not near the problem it was back in the film days. With our new digital cameras boosting ISO levels up into the six figures, and our wide aperture lenses allowing us to photograph in conditions that were unheard-of in the film days, low light is really not much of a problem these days.

Nevertheless, there are some times when we wish we had more light on the scene. I can think of a wedding I did years ago. I started out with plenty of light but as the ceremony continued, I was losing the ambient light fast. See Figure 1 below.

High ISOs Are Our Friends 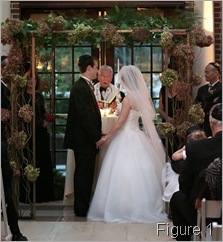 Now granted, I'm not going to be in those six-figure ISOs very often but I'm also not going to be afraid to use ISOs in the 3200-6400 range. In fact, with my Canon 5D Mark II I can easily shoot at ISO 3200 and not have a problem with the development of noise in my imagery. So what am I going to do? Couple the high ISOs with great software like LR3 and NIK DFINE 2.0, and it's really not a problem at all to photograph in dimly lit churches.

I seldom carry a tripod with me to any of my wedding events. They are way too awkward and really slow me down. The high ISOs offered by the cameras and the image stabilization features of the lenses really make a tripod a non-issue. OK, let me back up – let’s say you're afraid of the higher ISOs and prefer to shoot at a more nominal ISO 400-800 in a really dim church. Let's say you find yourself in a location where the shutter speed could be as slow as ¼ or ½ second – what are you going to do? Here's a secret most photographers don't know.

Wait For the “Pause Points”

As the priest, minister, or rabbi is celebrating the wedding rituals with the bride and groom, there's really a lot of movement going on during that part of the service. Here's my suggestion. When photographing in any dimly lit location where you’re using slower than usual shutter speeds – ½ - ¼ second, you must be on a tripod to stop the action. The way to assure yourself sharp images in low light at that part of the ceremony, make your exposures during the “pause points” of the wedding rituals. 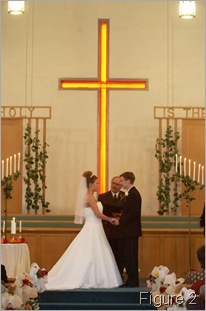 What do I mean by pause points? Pause points are those moments during the wedding ceremony where everyone has stopped talking or moving – see Figure 2.

Typical “pause points” during a wedding ceremony are at the end of sentences. Let the officiate end the sentence and then take 2-3 photographs a moment after the “pause point”. As the bride and groom exchange their vows they will reach “pause points” -- ends of sentences -- at which you can make your exposures.

You might have to give it a couple of tries but by identifying the “pause points” of the ceremony and making your exposures only during those “pause points” you'll be able to capture many sharp, defining-moment images on your wedding day coverages.

Hey gang, that’s it for me today. It’s back to work on my BIGGEST project around here – PhotoPro Expo [link].  As president of the PhotoPro Network [link], I have to tell you, it’s sort of like a part time job putting all the pieces together for this ambitious undertaking.

So if I sound super excited about it, it's because I am.  I want it to a HUGE success – both for the association and especially for all the attendees. That said folks, I’m heading out.  Have a good one and I’ll see you for Business Day Thursday tomorrow.