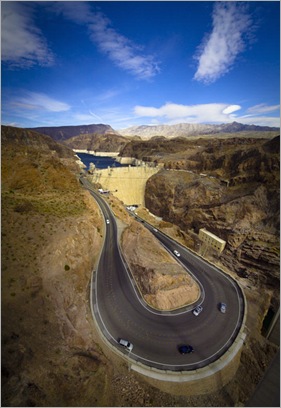 This image was captured while LaDawn and I were on one of the coolest drives and walks while visiting the Las Vegas area last week during the WPPI convention.  We headed out to Hoover Dam, not to see the Dam, but rather the new Mike O'Callaghan – Pat Tillman Memorial Bridge which now spans the canyon beside the Hoover Dam.

The site of the bridge crossing the canyon is, in itself, an amazing site for the canyon view.  But, the view of Hoover Dam is spectacular from the bridge.  This image was made as LaDawn and I were making our return walking trip across the bridge.

I decided  to go super wide angle for a few images. I thought this image was the most fun showing the big looping road leading to Hoover Dam.  LaDawn claims the concept was hers but I still took the shot.  Horizontally,  it lacked the impact of the vertical composition.

I tried to position the loop diagonally across the frame while still keeping Hoover Dam within the composition.  I thought the final crop was kind of fun.  As I inspected several quick peeks at the images taken before and after this photograph, you could see the cars making the loop run - I had to smile as I watched my mini slow motion film ;~)