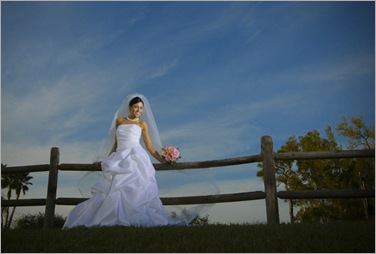 This image was made while I was shooting for Kelby Training a few years ago.  I selected this image for today’s post because it speaks to the tutorials I’m posting today.

This image represents a fairly normal situation we as wedding photographers find ourselves in over the course of the wedding season.  We’re shooting in an urban location – that means streets, telephone poles with wires, cars, etc. in the background.  That was the situation in this session. I was able to drop down into a gulley affording me a much lower vantage point for my shot.  That means I was able to drop the poles and wires out of the background quite easily.

Whenever I’m shooting outdoors, I always try to position the sun behind the subject.  That way I don’t get any “hatchet light” those bright specs of sunlight that sometimes fall on the subject – if the sun is behind the subject, that simply can’t happen. That was easy to do in this case as you can see by the direction of light falling on the trees in the background.

The result of my positioning the bride in this location was that I  illuminated the bride with direct sun light falling on her from behind but now her face was flatly lit by the ambient light.  Bringing my off-camera strobe in from camera right gave me the nice loop lighting on her face.

At F10 and at 1/320 second I was able to darken the sky sufficiently for my purposes.  That meant that my strobe at full power was just out of camera range camera right. I used the faster 1/320 second shutter speed to darken the sky even more.  Since native sync speed for the Canon 40D is 1/250 second, the bottom 1/3 of the image is NOT illuminated by the flash.  No problem though – it looks like an easy vignette on the subject which draws viewers’ attention even more to her face.  Check out today’s videos below for a thorough explanation – I think you’ll enjoy them.